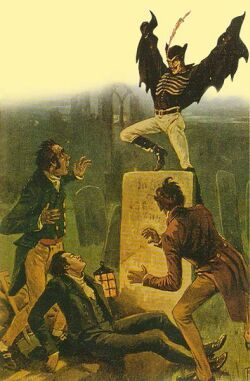 “But most of all did he dwell upon some mysterious blazing entity that shook and laughed and mocked at him.”

Beyond The Wall Of Sleep – H. P. Lovecraft

Supernatural? Invader from space? Prankster? Hysteria? Spring Heeled Jack’s notorious crimes that littered 19th Century London remain to this day one of the capital’s most bizarre series of crimes. Here is a brief catalogue of the weird events…

Early October 1837 – Cut-Throat Lane, Clapham Common. Mary Stevens, heading towards what was then Lavender Hill, was groped and kissed by a laughing maniac. The following night, a carriage on Streatham High Road was attacked by a creature. Both coachmen and the footman were injured in the crash. A woman walking near Clapham churchyard with her two sons observed a tall, thin and darkly clad gentleman who mocked them. 1839. Reports of bounding, fiery-eyed attackers come from as far afield as the Midlands.

Spring Heeled Jack’s exploits, since their birth, have embedded themselves in world folklore with similar apparitions being sighted across the United States, South America, France and elsewhere in the UK. Many researchers believe that the Marquis of Waterford was the man behind the original London crimes, an eccentric Irish nobleman about whom author Peter Haining claimed, “the exploits of Spring Heeled Jack were wholly within his capabilities”, in his detailed book on the legend (The Legend and Bizarre Crimes of Spring Heeled Jack). Waterford died in 1859, although similar attacks occurred in Norfolk in 1877.

Some theorise that SHJ was an extraterrestrial, but whatever your beliefs on alien humanoids, this theory just doesn’t hold weight. Jack was also blamed for the mysterious set of footprints covering snowy Devon in 1855, which could not be attributed to any known animal or means of human capability.

Whether ghost, devil, serial killer or prankster, the crimes and events that many claimed were the work of the infamous shadow will always remain foggy, because, just like Jack The Ripper only a few decades later, Sweeney Todd, the London Monster previous, and many other puzzling mysteries, they are simply best left unsolved, even as they persist to the present day.