Londonist has been chortling all day at the latest antics of Westminster Council. 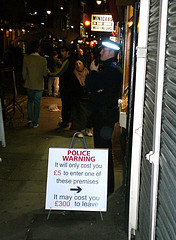 It would seem that they are so desperate to rid Soho of its last few bastions of (real) sin (as opposed to fake sin) and close down the remaining three clip joints that they have resorted to texting all who stray within 30 metres of one of these establishments – in the hope we guess of starving them out. They have after all failed to shut them down any other way, as clip joints are not subject to any normal licensing laws.

Passers by will be asked if they are happy to receive a text from the council; if they proceed they will be warned of the perils of entering such a den of iniquity. To their credit, the council is not on this occasion trying to preserve our moral sensibilities, but rather to save us money. For the uninitiated (and we have to assume that our readers are not all corrupt and street wise), a clip joint is a venue offering scantily clad titillation to those in need of such things: the entry fee is attractively low, but the exit fee can be exorbitant, as many a stray tourist/intoxicated reveller has discovered (try a fiver to get in, a pony for a glass of pop, and five hundred smackers to get out again).

This is extortion to all intents and purposes, and Londonist certainly doesn’t condone such practices. The idea of using Bluetooth technology to counter red-faced penury is both clever and fun, and hats off to the council for their initiative.

But just a little bit of us agrees with Philip Hensher when he wrote:

The Westminster council clean-up of the 1980s was enormously successful, to the point where one feels the few clip joints remaining and their haggard doorkeepers (‘Lovely nude girls, sir?’) ought to have preservation orders slapped on them.

Soho is one of London’s tourist attractions because of its slightly dodgy image, and few of those entering its borders are any illusions as to what to expect.

And Londonist is also deeply worried about the fact that the government/council/what you will has discovered texting as a tool further to nanny us. This is a very dangerous slippery slope – imagine your phone buzzing every time you reach for the corkscrew or open the fridge, or if you fail to come within the radius of the gym. The day is coming when our bijou mobile phones, that used to vibrate so reassuringly in our pockets, will turn against us. You read it here first….