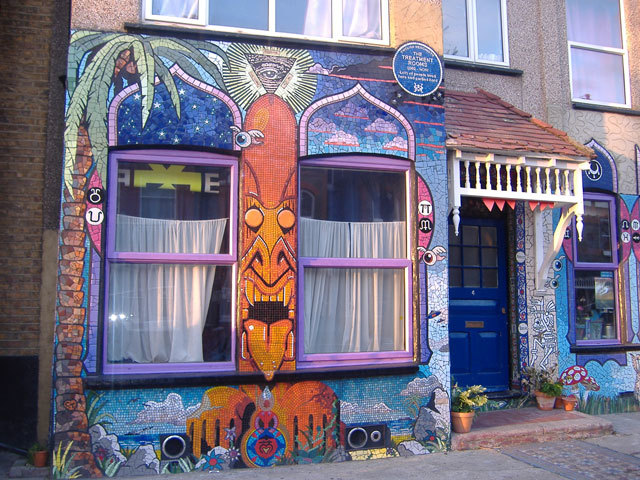 The Treatment Rooms is a privately owned three-story house in the West London suburb of Chiswick, which over the past several years has had its exterior walls transformed into an ongoing self-contained conceptual piece of mosaic art. The vibrant and well executed mosaics, which cover the front wall of the house and the back garden wall are well worth paying a visit to see.

Recently, Londonist took an opportunity to visit the Treatment Rooms and sit down for a cup of tea with its founder, Baroness von Reichardt. Here's our interview.

How long have you lived here and when did you start covering your house with mosaics?

I have been living here for ten years and making my mosaics for the last eight.

So the next obvious question, then, is why?

It’s a combination of reasons, really. I do lots of work for councils and schools, and that sort of art is always censored or has to adhere to guidelines. Without there being anywhere to show my own unmodified artwork, the idea of using my house to share with the world seemed like the only way I could make sure my artwork was completely as I wanted to show it.

I have always been interested in Visionary and Outsider Art. Before I began the mosaics, I bought a book called Fantasy Worlds by Deidi Von Schaewer, which features the works of artists who have transformed their homes to fulfil their fantastic visions of the world. So that Christmas, I thought to myself, ‘Why not put my art on our house and have our own fantasy world?’ I came up with the initial concept and my partner, Mr Spunky, did the drawings. Luckily it’s worked out. That's still how we work, taking it piece by piece as we go.

What is it about Outsider Art that interests you?

What interests me most is the intension of artists. Why did they create their art? What drives them to create? Outsider Artists have no choice but to be artists, being driven so strongly by their visions.

It is ridiculous how people seem more interested in what the Saatchi Gallery thinks an artwork to be worth than in what the piece actually means. I’m quite against the commoditization of art. For me, the most important thing about art is that it is seen. With Outsider and Visionary Art, everyone can see it; that’s what I like about it.

Do you consider yourself a Visionary Artist?

That’s a difficult question to answer. Unlike many of these artists, there was no great calling from God for me. Also, Outsider Artists usually come from an untrained background. I have a degree; so, obviously, I don’t fit that mould. But, I would like the Treatment Rooms to be seen in the same group of work.

I was inspired by Outsider Art as well as graffiti because they seemed liked the perfect exposure for having art seen. I liked the idea that on this quaint little street in Chiswick something as incongruous as a house completely covered in mosaic art might exist.

So, you’re inspired by graffiti?

Yes. Like Outsider Art, graffiti and street art reclaim space from the continual bombardment of advertising. If I had to describe my inspirations by examples in the media, I would point to three: Wooster Collective [a website “dedicated to showcasing and celebrating ephemeral art placed on streets in cities around the world”], Juxtapoz [a monthly lowbrow art and culture magazine] and Raw Vision [a quarterly magazine featuring Outsider Art, Art Brut, and Contemporary Folk Art”]. The great thing about graffiti, which I want to emulate, is that it is bright, colourful and non-selling. 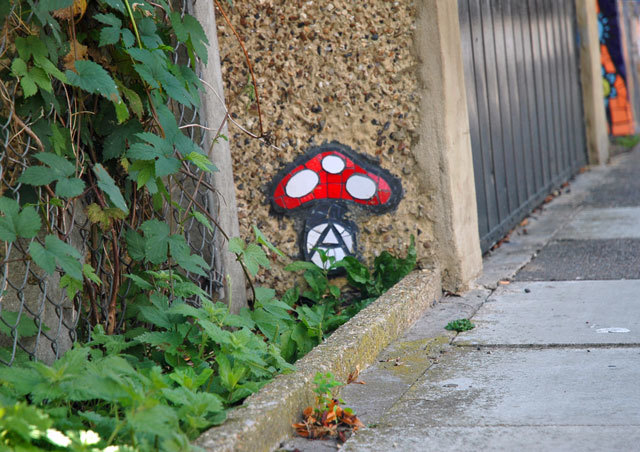 What do you think about graffiti mosaic artist Space Invader?

I love Space Invader. He has a great quote, something to the effect of “true artists take risks.” His mosaics are much simpler to create and to attach to walls than my more elaborate mosaics, which would leave me to open to being caught. That’s another reason I chose to show my artwork on my own house.

Ironically, I think that if I had painted the same images onto my house rather than apply mosaic tiles, they would have been got rid of years ago. People realize that making mosaics is a labour intensive process. People that have seen the house from a distance or have only seen photos of it have told me that they didn’t realize the work was entirely made up of tiles. Whether or not people like the subject matter they give me credit for putting a lot of work into it, allowing me to get away with a lot more than if I had simply painted or pasted up my art.

What do people, especially your neighbours, think about your house being covered in mosaic tiles?

I’ve been waiting for someone to object, but no one ever has. Out of all the hundreds of comments about the Treatment Rooms, only two people have ever communicated bad things. Our street has had houses sell at market prices and has had new neighbours move in since I started the mosaics. So the neighbours must be alright with it.

A few times a year, we have an unveiling of a new bit for the walls and invite our friends, family and neighbours over for it. People bring food, and it’s similar to being at a street party. I now know most of our neighbours, and have helped neighbours to meet and become friends through our unveilings. We try to be inclusive and help build community spirit. 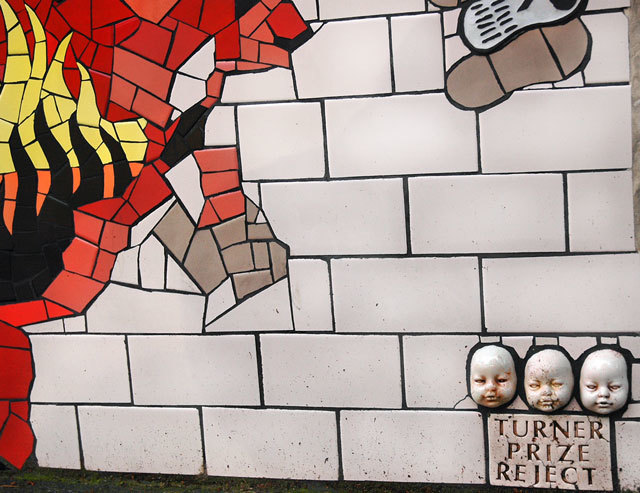 Is it okay for people to visit the Treatment Rooms?

Yes, of course. People are welcome to take photos. If we’re around, we always make an effort to say hello.

It’s amazing the number of people who come round to see the house, especially people with small children, which proves my theory that people do want art with meaning. Before I started the Treatment Rooms, I worked with a group of students on a library wall mosaic to promote recycling. One of the students came up with the phrase “Stop murdering the planet, the planet bleeds too,” which I and the other students thought was great. However, the council did not allow it to be used. Instead, we used “The environment is everywhere.” Whenever there’s a steering committee, the focus is more on safe platitudes than expression. With layers and layers of people, art gets watered down and loses its meaning.

What is the meaning of the Treatment Rooms and your mosaics?

My mosaics are my therapy, hence the name. Before I started them, I suffered from extreme clinical depression, near the point of being hospitalized. Mosaic-ing helped bring some hopefulness back to my life. At the same time that I started my mosaics, I read something in Big Issue magazine appealing to people to write to inmates on Death Row as a humanitarian gesture, which I did. Writing to someone on Death Row gives perspective; no matter bad you may feel at least you’re not incarcerated and awaiting execution.

One of the inmates I wrote was Luis Ramirez. After Luis’ execution, I started mosaic-ing for eight hours a day. The wall around the back garden is in memory of him, whom I believe was innocent and unjustly convicted for murder. Today, I have five pen pals on Death Row.

The making of the Treatment Rooms and my involvement in the anti Death Row movement have come together. My correspondence with Luis was my introduction to the horrors of the American criminal justice system. Most people have no idea how awful Death Row really is. They don't realize how arbitrary so call "justice" is. Luis once told me that "captial punishment means, those with no capital get punished." I see the death penalty in America as a continued form of lynching, just now they kill the poor along with the blacks. 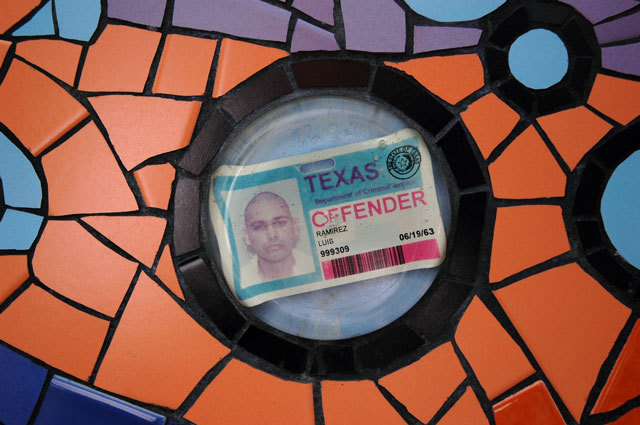 What’s in the future for you and the Treatment Rooms?

I plan to open a gallery in January. The gallery will be nearby and called the Black Sheep, focusing on outsider and political art.

Mr Spunky and I are also working on a “tiki” truck for the upcoming Art Car Parade in Manchester this September. Our truck is dedicated to another Death Row inmate named Ash. 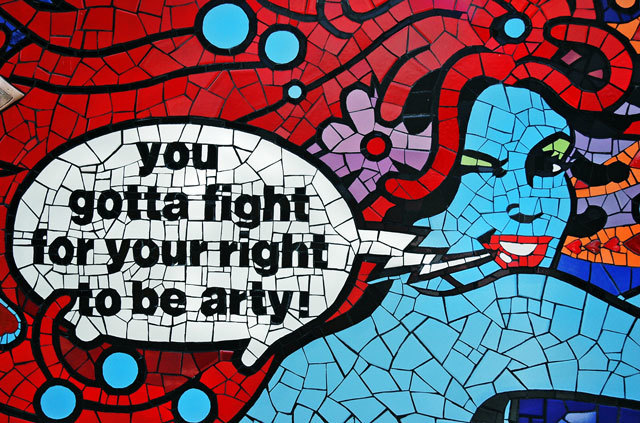 The Treatment Rooms is located a short walk from Chiswick Park Tube Station at 4 Fairlawn Grove, W4 5EH. Londonist recommends dropping by for a look but stresses that the house is in a quiet residential area which wishes to remain that way. For more information, visit the Treatment Rooms MySpace profile.

Top photograph courtesy of Baroness Von Reichardt all other photographs by Tiki Chris.