Fire in the Sky

Clouds were billowing over Park Royal yesterday afternoon when a blaze broke out in a warehouse. The fire took hold quickly and spread to two neighbouring companies, triggering the widespread evacuation of the area. It took 20 fire engines and over 100 firefighters to bring matters under control, and the area was still smouldering and pretty much sealed off this morning.

The cause of the fire is still being investigated, but it is believed to have started in a hair product factory. The two other businesses destroyed are apparently food manufacturers. Mrs. Haddad of the Lebanese bakery Dina Foods (a few doors along from the blaze) spoke to us this morning: 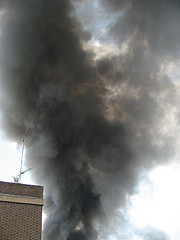 "BBC TV and London Tonight arrived at the scene around 3:00pm and took shots of the blaze. The BBC wanted to speak to one of the unit’s owner that was on fire, but he was too distressed to speak to them.

The area was sealed for the rest of the day and until today, which has caused tremendous traffic all around the A40/Park Royal. There were 10s of fire fighters, they had their operation room in Asda car park across the road and were working throughout the night to put out the fire. It was under control by the early hours of this morning, but there is a very strong smell of fire and we could feel the heat inside the building."

Now Park Royal is a sort of black hole in London’s industrial landscape – most Londoners know it is there, and can even pinpoint it vaguely on the map, but the major transport routes skirt around it, and only a very few of us actually venture inside… It is of course an important part of London’s economy – between the wars its proximity to several railways and major roads out of London led to commercial growth and at one stage it was the biggest industrial zone in Southern England. It is now no longer a viable site for major industry – it is completely surrounded and there is no room for expansion. And so over the last twenty years the area has changed. Attracted by low prices and proximity to central London, hundreds of smaller outfits, many of them importers, most of them non-English, have made Park Royal their base: the area has become the workshop and store cupboard for many of the capital’s immigrant communities. It is actually a fascinating place, and for the initiated, a terrific place to source rare and exotic bargains.

Londonist is upset about this fire (although we are very happy that no-one was hurt). It has not affected a comfortably insured, big corporation, but has, rather, devastated the livelihoods of at least three small companies struggling to get a foothold in the commercial maelstrom that is London. Most Londoners are hardened to the sound of sirens or the sight of smoke on the horizon, but it is as well to recall that behind every incident lies a complex chain of consequences.