Dragons! Dragons on the horizon!

By London_Sian Last edited 155 months ago
London_Sian Dragons! Dragons on the horizon! 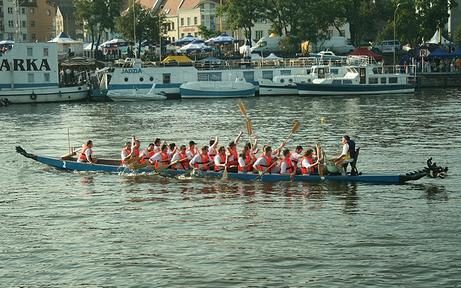 We've only just finished telling you tales of dragons flying over London. Now they're sailing our seas. Well, dragon boats are anyway. Not just any dragon boat. This boat just happened to break the world record for crossing the Channel, helped by a woman from South London.

Dicky Robinson from Wandsworth helped the all female 'Sisterhood' team sail to victory. They're now the first all female team to sale the channel in a dragon boat. Despite one of the crew having a broken collar bone and Kate Middleton (Prince William's on/off girlfriend) having to pull out due to 'excessive media attention'. These women are tough.

So, just how hard is this dragon boat malarky? Well, this Londonista has tried it. A 100 metre race later and she was exhausted and soaked to the skin. And she was trying really really hard. The Channel is 21 miles long. Londonist fear we wouldn't have made it past the first mile.

Thankfully, neither the male or female team had to worry about us that they quite literally smashed the record which stood at 7 hours and 45 minutes. The ladies took just 3 hours and 42 minutes to complete their journey. Only 12 minutes behind the men. We told you they were tough.

Luckily for worthy children's charities Babes in Arms and CHASE this meant that the teams raised over £100,000 which is pretty impressive. Londonist gives the everyone who took part a huge round of applause.

Maybe the Londonist team could look into trying to beat the record next year.