Transport for London Wants You To Walk More 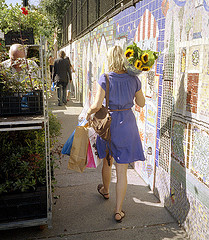 Transport for London thinks Londoners are lazy. They're suggesting that Londoners start adding at least 2 kilometres walking each day to their journeys, rather than driving or taking the tube or bus.

While we suspect they may have ulterior motives in suggesting this (perhaps reducing the strain on London's transport system?), it's actually not a bad idea. After all, it's recommended that we walk 10,000 steps per day, and walking an extra 2km every day will definitely help reach that goal.

Apparently, according to TfL, every day thirty million journeys are made in London, and they expect that to increase to 34 million per day by 2025. That's an awful lot of travelling, and according to TfL's research, half of all car journeys in outer London are less than two kilometers.

For those of you who, like us, can't mentally calculate distance in the blink of an eye, it may help to know that 2km is approximately the distance along Oxford Street between Marble Arch and Tottenham Court Road stations. At an average pace, that should take about 20 minutes and burns off 75 calories.

There are a few websites that can help you add to your walking time or figure out just how far you've gone. The Run London website has a great route finder where you can either plot a route or choose from routes saved by other users. And for suggestions for walks around the city, lastminute.com is adding a London Walks section, which will launch on 4 August and have a range of walking itineraries throughout London.