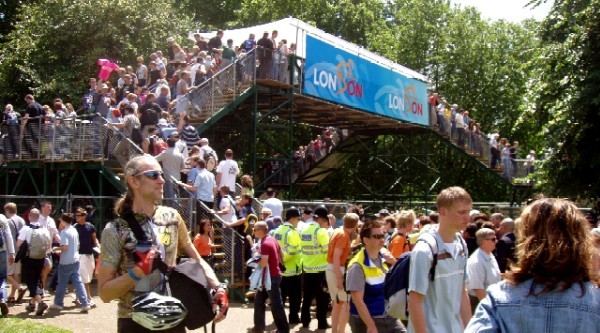 We think everybody who attended Saturday's sun-soaked Tour de France Prologue would agree that, on the whole, it was a well-organised, popular success. However, with the shadow of the Olympics hanging over every large scale sporting happening in London between now and 2012 our experiences at the race lead us to believe that there are still a few important tweaks that could be made for events like this in the lead up to the big summer games.

One - Have more crossing points

As we fought our way through the tide of humanity squeezing around us down West Carriage Drive we could see spots along the barrier on the inside of the course that were empty. Trouble was, it would take you an hour or more to journey to that tantalising space twenty yards away. There were only two bridges like the one pictured above around the whole of the Hyde Park section of the course and it simply wasn't enough. The queue to the South Carriage Drive bridge was hundreds of yards long and at one time shortly before the race the stewards felt the surge of people trying to cross into the park was so dangerous they closed it for a short while.. It sounds like the bridges over in Westminster were also under pressure. Lots of people were left squinting over other's shoulders or searching anxiously for a half-decent viewing location when spectator nirvana looked so readily attainable.

We saw several booths selling official t-shirts dotted around, but decided to wait till after the race before finally looking to purchase. Anything with "London" printed on it had sold out before the Prologue got under way. Anything in a childrens' size had sold out the previous day with no replacements coming in. With today's Stage 1 setting off from The Mall still to come, that's a woeful miscalculation. More understandable was the number of cold drink concessions with "Sold Out" signs up and the long queues for savoury food, but that still left a dry and empty taste in the mouth.

As the Hyde Park Corner big screen confirmed Fabian Cancellara as the winner, people naturally started heading for home in pretty much every conceivable direction. That's bound to lead to some bumping and boring, but what was of more concern was that, in the face of pleas from stewards pointing in the direction of momentarily opened and instantly overwhelmed crossing points, the kind of middle-aged spectators whom you felt would "shush" people commenting over-loudly at a bowls match felt compelled to start tearing one barrier from another and kick safety "hay bales" out of the way in order to cross ten yards of road without waiting for half an hour. In our opinion, it really should not have been a problem for officials to open up many more crossing points than they actually did.

Four - Don't leave spectators in the dark (or quiet)

Given that the action on offer to each of the vast majority of spectators was a couple of seconds per minute with, for most, no explanation on hand as to whom they were watching, we were amazed that as many people as did stuck out the whole three and a bit hours. At one point, perched on a low wall with a fine view to Wellington Arch we could very nearly hear the commentary from a big screen about fifty yards away and had a glorious view of the side of a big screen in a hospitality area. It was rumoured that the screen had earlier been pointing towards the public, but was turned to give the official guests (who didn't appear to take a huge amount of interest a lot of the time) a better view. The start lists posted up at information points helped a little, but wherever we went tackside the one person in a hundred who had a precious print-out of it in their hands could have made a sizeable profit if they'd run off a few spare copies or charged for their running announcements. The big screens themselves, it has to be said were in general well received and well attended. Maybe more tannoy speakers is the answer, but more needs to be done in this style of race to let people know what's going on.

Five - Work on spectator flow around the course

Late in the race we, like many others, encountered the four police officers and three stewards with a loud hailer and a makeshift gate gamely trying to turn back a steady stream of people wishing to join Constitution Hill on the Buckingham Palace side from Hyde Park Corner. "Ladies and gentlemen! No amount of smiling, chocolate or money will allow you through this gate today!" cried the lead policeman, neglecting to mention that looking confused and drifting past his colleagues or simply standing by the gate and waiting until they weren't looking were two approaches with a workable chance of success. Wearing a particularly noticeable t-shirt turned out to be bad planning in this regard. If anyone wanted to stymie their chances completely by asking questions they were directed to Hyde Park Corner tube where they could journey one stop along the Piccadilly line to Green Park, which is apparently just what a larger number of people than the station staff might have preferred attempted. Plenty of people were leaving Constitution Hill with dire (and piercing) warnings from the loud-hailer that "This is the point of no return!" so we're a bit puzzled why no-one was allowed to replace them. We wonder if this sort of thing is what led to the Victoria Street barriers looking particularly deserted in the latter stages of the event, though it could just have been that Victoria Street doesn't recommend itself as a particularly enticing viewing environment.