The Dude Needs You 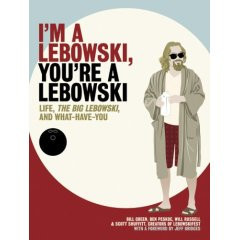 Attention all Big Lebowski fans: Your help is required.

If you're a fan of the 1998 Cohen brothers film, you'll be delighted to know that Jeff Bridges is being interviewed on Richard & Judy at 7pm tonight (31 July), and they're on the lookout for Big Lebowski fans to appear in the audience.

So, if you're free tonight, put down your White Russian, take off your bowling shoes and email angela@canongate.co.uk immediately, as there are a limited number of spaces available.

If you can't make it tonight, Canongate Books is releasing a companion book to the cult classic film, I'm A Lebowski, You're A Lebowski on Thursday 2 August, and there's a Lebowski Fest on in London 30 August.

That's an awful lot of Lebowski, but we're sure you can handle it.