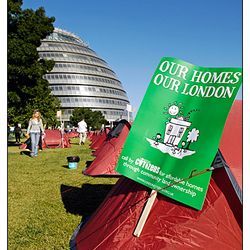 A new campaign has launched today and good luck to the plucky folk literally camping outside City Hall. The latest housing campaign by London Citizens, the group responsible for the Living Wage Campaign, is a call for housing co-operatives to be built on land held in common ownership.

50 tents and hundreds of campaigners from the diverse range of community groups, faith groups and local resident groups involved are currently occupying Potters Field next to City Hall to raise awareness and push for change in how housing is priced and how housing is built. Community land trusts are a way of giving people true ownership of their own homes, which is needed more than ever as house prices soar. The campaign starts today, under canvas. For more information, keep checking the London Citizens website here.