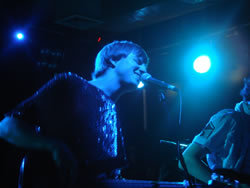 “This is a slower song – hope you don’t mind” Palladium’s Peter Pepper says before launching into “White Woman”. The audience certainly didn’t, as it gave a welcome respite from the scintillating pace they’d been playing at for the last twenty minutes.

Opening up with their new single “Happy Hour”, they quickly set out their manifesto: fast, friendly and frantic pop. Racing through 7 songs in 30 minutes, they worked the crowd well and had more arms flailing down the front than The Thrills did half an hour later for the main set of the evening.

Whilst trying to think of a band to compare them to, this Londonista really couldn’t decide, in the end settling on Klaxons fronted by Patrick Wolf playing Delays and Sunshine Underground. They really are an oddball group of people that really shouldn’t be in a band together, but somehow it just works.

There were three songs in the set (their opening two and closing song) which were very promising, easily able to outshine most of the current crop of pop-wannabes; however the middle of the set did seem to largely be filler that started to sound very similar. Their energy may have been unstoppable, but it’s no good if the tunes all sound similar but slightly re-jigged. 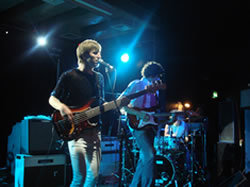 Peter Pepper (if that is his real name…) introduced the last, and perhaps best, song of their evening, Hi-5, by giving the record company spiel about buying their new single in a decidedly boring and un-Palladium like way… they might as well got the guys from EMI to do it themselves. This is one band where they should leave the music to do the talking for them.

Whilst at the moment Palladium are only playing small venues supporting bands, expect in time them to be playing their own palladiums and theatres near you

Palladium support Amy Winehouse at Somerset House tomorrow, then play Lovebox on Sunday and a headline show at the Barfly on Thursday 2nd August.

Photo is taken from the author's own collection of Palladium photos