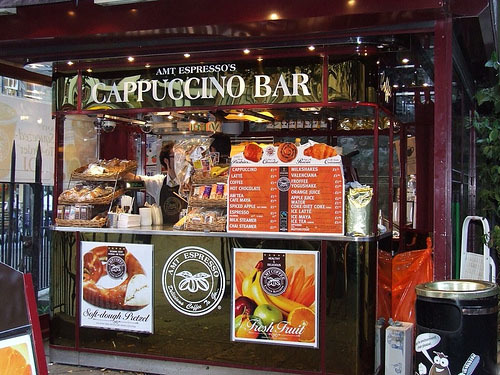 Londonist arrived at work a few days ago to hear some distressing news: AMT, which only serves 100% Fairtrade coffee to its punters, appears to have lost the contract from Network Rail for their outlets at ten of London’s major railway stations. The company that has won the franchise in AMT’s place does not, we are told, offer any Fairtrade products.

Our distress stems from the fact that not only will we be losing affordable, tasty coffee (and Chai Tea Lattes!), but also that this move is incongruous with London’s aim to become a Fairtrade City by 2008.

AMT’s loss of its 14 bars in these stations means it will sell 20,000 fewer cups of Fairtrade coffee each day, meaning coffee farmers will lose out on around £7,000 in investment for their communities, as well as the stability which comes with Fairtrade contracts and minimum prices.

If it bothers you that you won’t be able to get your caffeine fix with a clear conscience first thing in the morning, there are things you can do. Email Barbara Barnes, the Head of Customer Service at Network Rail at Barbara.Barnes@networkrail.co.uk, expressing your concern that it is important to offer Fairtrade produce, whether by AMT or not, as an easily accessible option in these mainline stations.

With a bit of luck, before long we’ll be back on the ethical (train) track.