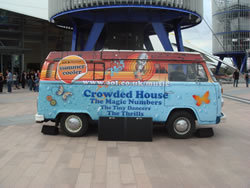 “We’re proud to be able to play in one of Tony Blair’s legacies to the UK” David Kay of Tiny Dancers said of their chance to be one of the first bands to play the indigo2 at the former Millennium Dome.

One of the most state of the art venues in the UK Indigo2 is the smaller of two venues at the new O2 complex which comprises shops, bars and cinema as well as the 20,000 arena and the 2,500 capacity indigo2. A contender to the likes of Koko and Shepherds Bush, its small enough for it to be used as “club gigs” for big bands, and large enough for small bands to aim for.

Up in the balcony the venue looked distinctly like a cinema, with plush seats (complete with stewards to tell you to get them off the seat in front) and speakers throughout. However, it lacks the quirks of some older venues: Whilst the sound is simply superb, the place lacks some of the atmosphere that darker, dingier places like the Astoria have and makes them so loved.

For the first nights entertainment, AOL took it over for their “sessions”, which last night saw Tiny Dancers, The Thrills, Magic Numbers and Crowded House take to the stage. Tiny Dancers were first up, playing to a half empty venue, however soon got into the spirit of things, playing five songs. Highlight was “Hannah, We Know” which saw dancing lego people on the giant screens behind the stage.

After the Jump: Band by Band reviews. 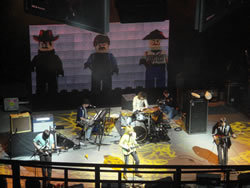 The Thrills were next up, debuting new material from their forthcoming album “Teenagers” alongside old favourites “Santa Cruz”, “Whatever Happened to Corey Haim?” and “One Horse Town”. Conor Deasy went into showman mode pretty quickly, getting everyone clapping along. Their new material is a natural progression from previous two albums, summery and Irish-American tinged.

In between sets AOL showed some of their previous sessions, with Paul Weller, Paolo Nutini and Ghosts all making appearances. In between The Thrills and Magic Numbers the crowd were treated to a backstage set from Siobhán Donaghy, which showed off her beautiful voice perfectly. However, being shown on video screens just made the entire audience feel detached from the experience.

Magic Numbers provided more summery tunes, with Michelle and Romeo seemingly a bit more used to the stage compared to when this Londonista saw them back in early 2005. Songs like “Forever Lost” and “Love Me Like You” sounded not at all faded, and performed with as much gusto as if they were written yesterday.

Finally, the guys most of the crowd had been waiting for, Crowded House. Hurtling through their set at a decent speed, they were chatty and genial to the crowd, with the Ozzies commenting that “It feels like I’m playing the Bowling Club Social” in regards to the number of summer hats floating around the crowd that were given out free by AOL. On their slower tracks, Neil Finn was clearly peeved with the amount of talking the balcony was doing, commenting “Listen you bastards! You can talk tomorrow!” which was a very fair point.

Four sets in four hours is a decent speed for any venue, however it’s just a shame it hasn’t got any of the soul some of London’s better venues have. The bands meanwhile overcame any issues they may have had with the venue by putting in a thoroughly entertaining show for all.