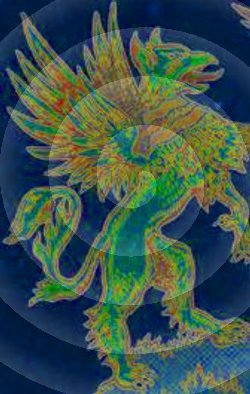 Picture the scene: it’s a summer’s day in 1984, and Kevin Chippendale is strolling along Braemer Road, Brentford, when something suddenly catches his eye flying near to the Green Dragon apartment building. Is it a bird? Is it a plane? No, it’s a Griffin!

But aren’t such flying wonders merely creatures of mythology?

Well you may scoff at such a sighting, but for a short while the soaring oddity that became known as the Brentford Griffin remained one of London’s most bizarre mysteries. And the sightings continued – Mr Chippendale saw the beast again in February of the following year, describing the monster as looking like a dog but with wings and having a long muzzle. Could it be just a weird coincidence that his sighting had taken place so near to the aptly named Green Dragon building?

It wasn’t just Kevin who spotted this creature. Angela Keyhoe (who knew Kevin) subsequently observed a large, black bird-like form perched on the gasometer next to the Waterman’s Art Centre, and to add credibility to the legend, a psychologist named John Olssen also saw the beaked terror whilst jogging along by the Thames.

The eerie phantom was soon attracting media attention, with the Six O’clock Show covering the sightings. However the whole mystery was considered by many to be a hoax, especially after novelist Robert Rankin detailed the sightings (with tongue firmly in cheek) and author Andrew Collins published a pamphlet on the enigma, The Brentford Griffin: The Truth Behind The Tales (1985 – Earthquest Books). Much of what was written, including eyewitness accounts, appears to have been fictional, but it seemed that the coverage of the beast had stirred one too many imaginations. In other words, if you believe in something enough, it may actually start to happen. As Rankin admitted:

We set up a Griffin hotline, and people started ringing in. I thought, “Hang on a minute, even if this thing had no reality at first, it has now!”

I invoked a ‘cosmic joker’, turning myth into reality.

When we consider that Brentford’s coat of arms features a Griffin, the local football team play at Griffin Park, and there is a pub called The Griffin in the town, should we consider the local monster as merely manifestation, or something very real and unusual that was simply moulded by local society who for decades had had a winged wonder buried deep within their consciousness?