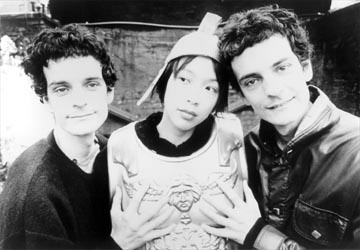 The epitome of mythical, mysterious, magical, Blonde Redhead are back with their seventh album "23" and played Koko this week at the end of a UK tour before jetting off to perform in Europe, Israel, Australia, Japan and the US.

The subdued lighting, ornate backdrop and intimacy of Koko suited them perfectly, the venue packing their hordes of worshipping fans together tightly. The set kicked off with "Dr Strangelove", a track from the new album, and was filled mostly with new tunes aside from a short interlude containing songs from last album "Misery Is A Butterfly", amply rewarded by excited screams from the crowd.

Blonde Redhead are an exciting proposition on record, all thudding, scudding beats, plinky plonky clavinet and techno freakery draped with the almost suffocating sweetness of Kazu Makino's silken tones and sliced in two by Amedeo Pace's rusty dagger of a voice. Live, they're even more urgent, with Simone Pace's sensitively solid drumming driving the fucked up fairytale music box ever onwards as Kazu and Amedeo sway bewitchingly against a backdrop of aquamarine smog, holding their own well against the unceasing clouds of chat emanating from the bar at the back of the room.

As the last song of the main set came to an end it could have been late Saturday night at Glastonbury, the mesmerised crowd swaying subconsciously, the sweet scent of skunk lingering in the air and the mood broken only by the usual annoying twats barging their way through the crowd clutching four pints of lager.

And finally, here's the video for 23 track "Top Ranking" starring the ever fabulous Miranda July: