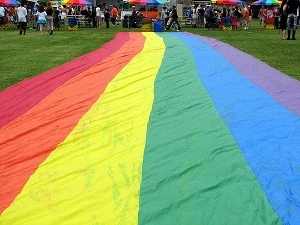 Europe's biggest gay and lesbian festival, Pride London, is back this Saturday. Expect a hefty downpour, if the current forecast is accurate.

There's heaps on this year, though, if you make it out to support your brothers and sisters. It all kicks off when the ever-eclectic Parade heads through the centre of town from 1pm, along a route taking in the West End's Oxford and Regent Streets before heading over to Tafalgar Square and Whitehall. This year's theme is 'Icons' so, well, be prepared for impressive Madonna/Kylie outfits, and maybe the odd political icon too - Oscar Wilde, anyone? Is Blair a gay icon?

At 3pm, attention will shift to Trafalgar Square (for politics, entertainment and music), to Leicester Square (for cabaret), and to Soho (for drinking). The Trafalgar Square line-up includes Unklejam and the Dragonettes, as well as the usual Mayor and Chris Smith. Time Lord John Barrowman will close the whole she-bang at just after 7pm. Cabaret highlights in Leicester Square include Dolly Diamond at 6.15pm and the Dame Edna Experience at 7.15pm. Women have their own stage with cool DJs and bands too, including Voodoo Hussy.

If this doesn't exhaust you, then later in the evening the real partying will start across the capital. A novelty this year will be in afterhours clubs as the smoking ban comes into force on Sunday. Some clubs will effectively start the ban early at midnight, so if you're headed for a club don't count on being allowed to smoke 'em. When everyone collapses in bed, all prided-out for another year, everyone can be glad that their clothes will only smell of sweaty clubbers rather than stale tobacco. Smoke-Free Pride!

Full details of the day are here.