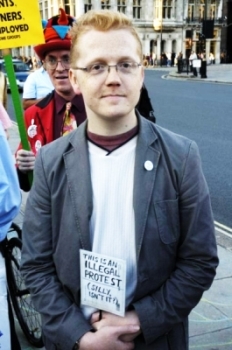 Today marks the release of Taking Liberties, a documentary close to our hearts all about the erosion of civil liberties. Described by The Times as an "eloquent mugging" and as an "angry howl of protest" by Total Film, we highly recommend you go and see it - full listings here.

The lovely people behind the film have given us four copies of the accompanying book - called, imaginatively enough, Taking Liberties - to give away to Londonist readers.

To win one of them, all you have to do is come up with the most amusing idea for something to protest against at one of the Mark Thomas-organised mass lone demos. Maybe you think that yogic flying should be made an Olympic sport? Do you find Tube Lady's inexplicable emphasis on prepositions (please keep your belongings WITH you AT all times) infuriating? Or perhaps you're of the opinion that George Galloway should get his smug face off BBLB, stop whoring himself out on telly to anyone who offers him two and six and a packet of fags, and get back to his constituency work? Oh shit, that last one isn't funny or arch, it's our actual opinion. Anyway, we're sure you can do better!

Entry via the Comments section; winners to be picked by the Londonist team when we get round to it; get cracking, dear readers!

Image of one super-cool illegal protester pinched from the No Liberties website, with thanks