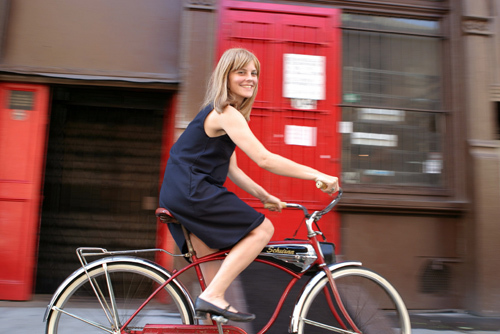 Thoughtful, haunting and slightly odd, Scout Niblett's music is the kind that creeps up on you unawares and sinks its beautiful, fuzzy-guitared teeth in. With a new EP out on Monday and a show at Bush Hall the same night, Scout's a busy woman but we managed to catch up with her by email to discuss more important matters: Rugeley, astrology and stink bombs. Oh, and supporting Iggy Pop at this summer's Meltdown...

So, what's new with Scout Niblett?

i just recorded an album. so i'm really excited.

What three words would you use to describe your music?

What three words would a fan use to describe your music?

You're originally from England but live in America. What does it feel like when you come back to England to play?

i'm actually from staffordshire originally. a place called "rugeley". doing shows anywhere can be pretty fun. UK or anywhere. it depends more on the timimg of things than the place as to how i feel about the shows though.

What are the main differences for you between living in the US and the UK?

i feel more free to do what i do in my own way in the US. i guess i feel more able to be myself.

I read that you're very interested in astrology, hence the naming of your 2005 album "Kidnapped By Neptune". What's going on in the stars for you at the moment?

loads of stuff. the asteriod chiron is taking its toll on me....but its effects can be good too. its represents "the wounded healer". saturn is also in play right now. leading to tensions, loss and seriousness in relationships with people. neptune is also still having its way with me. i'm pretty delusional and live on a dose of wishful thinking still most of the time.

You're supporting Iggy Pop and the Stooges at Meltdown in June - how did that come about? Are you looking forward to it?

jarvis cocker asked me if i'd like to do it. i am so excited you wouldn't believe. i'm gonna knit iggy a jumper and give it to him. it might have a flash of lightening on the shoulder.

Do you have any musical recommendations for us? What music is getting you excited at the moment?

stuff from like now,....well how about mike wexler form new york, and a band from eureka called the monster women. i also like a band called arboretum from baltimore. also "dave cloud" from nashville is fun.

What's your favourite thing about London?

letting off stink bombs on the tube.

What would your ideal day out in London consist of?

visiting the astrology shop in covent garden. cups of tea and scrambled eggs on toast in a generic cafe, then stink bombs.

And ideal night out?

it would be good to go down by the river. i like all the bridges.

What does the rest of 2007 hold for Scout Niblett?

e.p comes out 21st of may. touring euorpe. touring US. album release in the autumn. more touring after that. and some video making in between. also i might move to jamaica. i'm definately gonna go on holiday there to scout it out.

A live version of one of the songs on the new EP - "Dinosaur Egg" - is available for free download here. The EP is called "Just Do It/Dinosaur Egg" and is released on Monday on Too Pure.