The Liver Is Evil And Must Be Punished: Wenlock Arms

By Hazel Last edited 169 months ago
Hazel The Liver Is Evil And Must Be Punished: Wenlock Arms 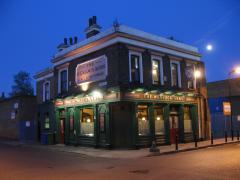 Sick of the endless identkit plastic pubs full of plastic people drinking plastic drinks that plague London, we are always up for an unusual and authentic old fashioned boozer with good beer and local colour.

The Wenlock Arms is about five minutes' walk from Old Street tube station, and nestles behind some intimidating council tower blocks and past an industrial unit in a quiet corner of Hoxton that the Nathan Barleys of the world tend not to visit. It is an accomodating little pub, even tolerating Nathan, but he should not overstay as he is not really welcome. This is a Local Pub For Local People, and that is to be commended.

The pub is full of fun local character, with an East End accent much in evidence. Mirror adverts cover the walls and a healtly selection of pump clips adorn the bar to show the variety of beers that have been offered recently. The slightly tired carpet and scuffed base of the bar show that

many people have visited the place over the years.

A menu sits on the fireplace with, alas, a speaker promising karaoke or other music. It is not in operation on this quiet Monday evening. Other evenings later in the week have live entertainment which is reputedly excellent, and you may wish to check the Wenlock's website for full listings.

The obscured menu promises "Veg Pasty. Meat Pasty" - the kind of meat left unsaid - then a crossed-out "por" - pork what? Oh well, we can't have it anyway - then "saus-" and "hot san-". Clearly "traditional" pub fare, i.e.still stuck somewhere in the 1970s. If it does other food, it was not being advertised. The bar snacks were more interesting in that they included biltong on top of the usual crisps and nuts.

There was more than a little amusement amongst the regulars as to a pint of lager found on the bar. Presumably somebody ordered it, but they were evidently too embarassed to collect it. Over the next hour, the locals tried to palm the damn thing off onto anybody who walked in, but everybody had the good taste to decline. It was loudly noted that this was not the kind of pub

that lager drinkers would visit. About an hour later, it was finally quietly disposed of, undrunk.

Kriek (£3.80/pint). All were well-kept and the Kriek was a nice find in a bitter-drinker's paradise.

The Wenlock Arms hosts an annual beer festival in September or October which is always very popular.

Londonist buys their own drinks.