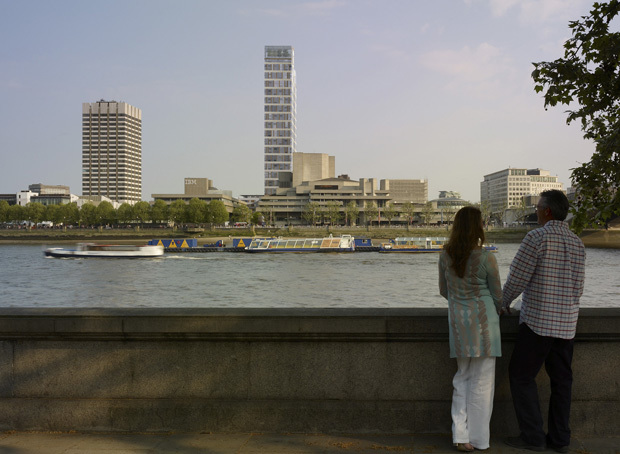 This is the latest version of the Doon Street Tower, a skyscraper proposed by Coin Street Community Builders to sit on the South Bank near the OXO Tower.

Designed by Lifschutz Davidson Sandilands, the scheme had previously proven controversial thanks to its loftiness, which would have made it visible from a number of viewpoints including St James’s Park and the courtyard of Somerset House. Complaints came from the usual suspects including English Heritage, the Royal Parks Commission and the City of Westminster.

The architects grappled with this by giving the tower the usual treatment – slicing some height off it. In this case four floors were removed shrinking the total height by 28 metres to 140 metres and a reduction in the number of apartments on offer from 355 to 329.

Other design changes have included alterations to the cladding that will now be bronze and white stone rather than the previous stainless steel.

Coin Street Community Builders hope that with the new plans, Doon Street Tower can get approval and the much needed local facilities they want to provide can finally be achieved with its construction.