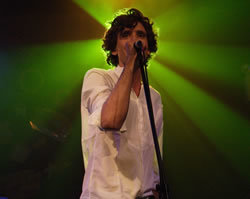 Lots on sale tomorrow morning and today, so straight in we go.

First up, Smashing Pumpkins have announced a one off date at Shepherds Bush Empire on Tuesday 19th June, ahead of their (sure to be) sensational return to Reading and Leeds Festivals. Tickets are sure to go quickly, so make sure you're there are 9:30 tomorrow morning to catch them.Londonist favourite Mika has announced two London shows as part of a full UK tour at the end of the year. He plays Brixton Academy on Sunday 2nd December and goes north of the river to the Hammersmith Apollo on Monday 3rd December. Tickets are on sale at 9am tomorrow morning.Iron Maiden are also doing a one off show at Brixton Academy on Sunday 24th June in aid of The Clive Burr MS Trust fund, and will be their last show for at least a year, after their Download set next Weekend. Newcastle's finest Maximo Park are playing two nights at Brixton Academy on Thursday 11th & Friday 12th October - 9am tomorrow is the time to be online for these.Kings of Leon are doing a full UK arena tour in December, taking in Wembley Arena on Wednesday December 12th. Tickets are again at 9am tomorrow.John Peel favourites The Undertones are doing a one off show at Shepherds Bush Empire on Saturday 13th October. Tickets are available now from ticketweb.Already on sale are tickets for Interpol at Alexandra Palace on Thursday 29th November, and two dates for The Gossip at the Forum on Thursday and Friday 13th and 14th September.Looks like that’s this month’s pay gone then! Photo taken from Mediaeater's flickr stream