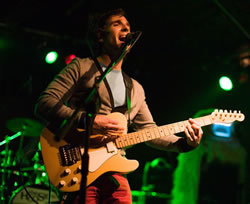 One of the hottest new bands around at the moment, The Hoosiers are receiving rave reviews and wowing crowds across the country on their joint headlining tour with Grace.

Sounding like a fun British mix of We Are Scientists and Kooks together at once - the humour of WAS' live shows, and the British indie-pop nature of Kooks. Either way, they're bound to be at a lot of festivals this summer, and their debut single "Worried About Ray" is out on June 25th.We caught up with the lads, who gave us their unique perspective on London.Who's in the band?Weighing in at a combined weight of 35 stone, the Hoosiers are Irwin 'the Mole' Sparkes, Alphonso 'ein ein acht' Sharland and Martin Skagendahl.What do you do in the real world?The real world no longer exists for the Hoosiers.Describe your sound to us.Foot tapping Odd PopperyHow did you all get together?We met on an online dating incentive, it was buy one get one thre!Who are your influences?Buckley, the Cure, Supertramp, Stevie (both Nicks and Wonder), and Eddie Murphy.What's the greatest lyric you've written?'Imagine there’s no heaven'What's the state of play with the band at the moment?We are currently on speaking terms, but its edgy after Irwin sat on Martins cucumber sandwich whilst on tour. Irwin has promised to replace it, but we have not seen a cucumber in the last 4 service stations.Where can we see you / hear you next?Single is out June 25th, Myspace us up on Myspace/thehoosiersWhat's the big gameplan for the band?Britain, Europe and then probably the world.Who would you most like to support?Chelsea. They always win.What's your ultimate label to be on?RCA - We hear they are amazing, especially Chloe. (they're currently signed to RCA and Chloe is their press girl - Ed.)What's the best gig you've ever been to?Flaming lips. Radiohead. Either or.Have you ever thrown a TV out of a Hotel window?I once threw a hotel window out of a TV. Beat that.Any great stories from the road?The road has nothing to add at this junction.Recommend one album to our readers you don't think they will have discovered.Grace - Detours.Why should Londonist readers go and see you?We are bloomin' good. And on top of that we put on a bloody good show. And good value for money.What's Your Favourite:


Venue to play in London? 93feetEast

Venue to go to in London? Shepherds Bush Empire

Place for a post-gig kebab? Green lanes 'kebab and ting'.


No, but I did wake someone up to make sure they didn't miss their stop who proceeded to vomit having assured me that his stop was the end of the line.

Greatest thing to ever come out of London?


The Victoria line/ the Clash

If you could write a song about London what would it be called and what kind of song would it be?


"London is nice, but it's very hard to park"

and finally...Sum up London in a word...

The Hoosiers play Faceparty HQ (invite only) next Tuesday, and then Blowback Magazine's Festival at Vibe Bar on June 13th, before hitting the festival circuit, first stop of which is the Chiswick House Summer Festival on July 5th.