Couldn't Escape If We Wanted To: Preview 6

Und, finalement...here are the remaining songs from Eurovision.

Russia send Serebro, a funky girl band, singing a grindy electro-ish catchy pop song much like something Britney should be singing. It's one of the few proper pop songs in the Contest this year and Russia came second last year - Moscow 2008,

The German entrant this year is the rather dishy Roger Cicero, singing a swing jazz number praising how women rule the world. 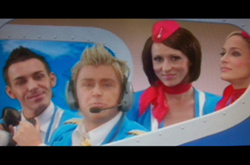 United Kingdom - Scooch are camp, frothy, and delightfully flying the UK flag. Romania's entrants are Todomondo, 6 blokes singing about love in 6 different languages. It's ridiculously catchy and quite charming, and goes a bit bonkers when the police siren kicks in before the key change. Wahey. Armenia send a mid-tempo love ballad, with the air of a faint late 80s easy-listening sound. Not one to be reckoned with.

And that's it! Who's your favourite? It all kicks off tomorrow night with the semi-final, broadcast on BBC3 at 8pm and the final, with added Terry Wogan, is on BBC1, Saturday, 8pm.