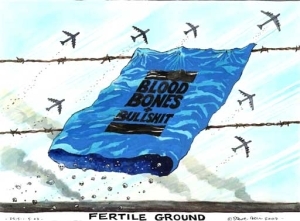 In the UK, public inquiries are used as a way of scrutinising our systems and making sure they work as they ought to. The tragic death of Victoria Climbié rightly triggered an inquiry which concluded that had timely action been taken on any one of twelve opportunities for intervention which were identified, Victoria might still be alive. More widely, the inquiry looked into how well – or how badly – public bodies work with each other to protect the most vulnerable members of society, using Victoria's case as a catalyst.

Inquiries are painful, difficult, often costly and lengthy, but ultimately worthwhile. So why is the government digging in its heels over an inquiry into the activities of the security services in the period leading up to the 7/7 Tube bombings? This is a question being asked by, among others, a group of people affected by 7/7 who have sent an open letter to John Reid via their lawyers:

Our clients seek an independent and impartial public inquiry into events that took place on 7th July 2005 with a view to the production of a publicly available report containing appropriate recommendations.

[…] Whilst this is not an exhaustive list of issues, our clients seek the production of a comprehensive, accurate and definitive factual account of how the bombings occurred culminating in the attacks themselves, the police investigation and the emergency response to the bombings.

Our clients are prepared to accept that the inquiry should not prejudice any ongoing investigation, but will expect you to account for what investigations are ongoing and how they may be prejudiced.

The Home Office's typically sensitive and thoughtful response notes that Reid, surely the most uninspiring Home Secretary in living memory (an impressive achievement, given the competition), will "give very careful consideration to the matter" but that "experience has shown that a fuller public inquiry can take years and divert huge resources". So we shouldn't look at how the fanatical, deluded, attention-seeking suicides slipped through the net carrying bags of explosive because, er, it might cost too much? What, more than the cost to the economy of another terrorist outrage, in London, or Glasgow, or Manchester, or Leeds, not to mention the damage to community relations and ideals of tolerance, and to human flesh and bone?

The call for an inquiry is especially timely as a fuller picture of exactly how much our security services knew about the London bombers gradually emerges, most recently in the trial of the fertiliser plot would-be bombers. If, as the government claimed in the post-7/7 aftermath, the bombers were "clean skins" then why does surveillance footage exist of Mohammad Sidique Khan talking to Omar Khyam, the would-be murderer who wanted to blow up shoppers at Bluewater in a shower of ammonium nitrate and half-baked theology? With the media for once pretty much entirely united behind calls for an inquiry – not just because it would fill column inches for years to come – who knows, perhaps MI5 and MI6's dirty laundry may be aired in public.

If you agree an inquiry is necessary, there is a No 10 petition you can sign to show your support:

We the undersigned petition the Prime Minister to hold a full public inquiry into the London bombings of July 7 2005.

More than a year after that terrible atrocity that killed at least 52 people and maimed many more, there still hasn't been a full public inquiry into that event. The "Narrative" and the ISC report we were given are insufficient. We've had public inquiries into far less serious events, why not this? We now know that the attacks did not come "out of the blue" as was asserted by the Home Secretary at the time.

Finally, we'd like to point out that 7/7 survivor and eloquent blogger Rachel from North London must be one of the only people in the world ever to have written the words "We are looking forward to hearing back from John Reid" and sincerely to have meant them. But wait, what's this she adds? "… via our lawyers." Ah, that makes a bit more sense.