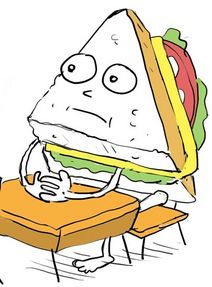 We begrudgingly admit that there is probably some sort of need for these banal stag-night magnet, "2-4-1 on bottles of carlsberg? Wahey! Let's get a bucket of spicy chicken wings and soak up the casual misogyny" temples of humour-barren shite, but don't dare invite us to come when there are a good deal of small clubs run by people for love of comedy and little else where you won't have to endure lazy routines about the difference between men and women; how everyone from Liverpool is out to nick your hubcaps or jokes with the punchline "and that was just the women!"

As it happens, an exciting looking new one is starting up next week in Camden. After School Comedy is "a new comedy club dedicated to all things silly, surreal, weird, offensive, intelligent, and any comedy outside of the mainstream. If Jongleurs hate it, we love it! "

And on top of that, there'll be free cakes and badges, drawing competitions (whoever draws the best picture in the interval wins booze!)

Its first line up is pretty impressive too. The night features Caroline Clifford (who we interviewed a little while back), Henry Paker, Caroline Mabey, James Mason, Tomi Walamies and headlining is the supremely absurd Andrew O'Neill.

After School Comedy is at the Liberties Bar, 100 Camden High Street, on the first and third Monday of the month and its opening night is on June 4th. Entry is £5, doors open at 8pm for an 8.30pm start. The image is Jeff the Sandwich, After School Comedy's luncheony mascot.