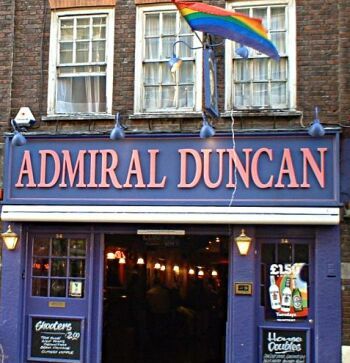 Tuesday – 1st May 2000: The May Day anti-capitalism protests bring mass violence and vandalism to central London. On the same day one year later, police detain thousands of protesters and unwitting bystanders in Oxford Circus for about 6 hours. Wednesday – 2nd May 1536: Anne Boleyn, the second wife of Henry VII, is arrested on charges of adultery and taken to the Tower of London. Thursday – 3rd May 1951: The Royal Festival Hall is opened by George VI, as a part of the Festival of Britain. Friday – 4th May 2000: Ken Livingstone is elected the first Mayor of London.

According to The London Companion by Jo Swinnerton:

In 1952 a Nigerian visitor to London was accused of committing an indecent act with a pigeon in Trafalgar Square. As the law at the time prevented only indecency with an animal, the defence attempted to put the case that a pigeon was not an animal. The judge disagreed. The accused was fined £50, and a further £10 for taking the pigeon home and eating it for dinner.

Whatever you do, don’t tell Brian.

The good weather is going to continue this week, with plenty of sunshine in-between the clouds. The forecasters don’t seem to think there’s going to be much rain, if any, but it might get a bit chilly at night later in the week.

One Thing You Must Do In London This Week

Visit a museum in the evening. This is not as fruitless an exercise as you might think, as about a dozen of London’s most popular museums and galleries are participating in the ‘Lates’ season of “after-hours art and culture in London to be enjoyed at twilight, sundown or lights-out”, starting this week. At the time of writing there’s only a limited amount of information available on the lates.org website, but more detail is promised and the events look very promising indeed.

One question though – as this is billed as a ‘Mayor of London’ initiative (at least according to the leaflet on the not-yet-finished website), why isn’t Ken’s office promoting this a bit more? To date we’ve heard very little about it, and it would be a shame for a promising initiative like this to suffer from a lack of public awareness…