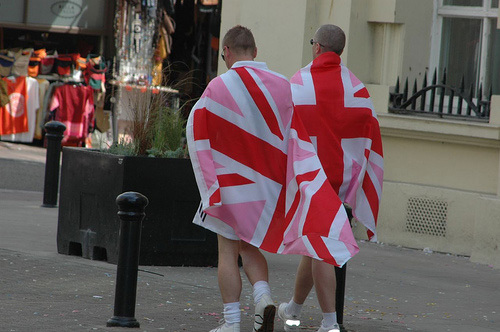 This weekend the police raided FIRE, London's biggest gay club - and closed it under the Misue of Drugs Act. The threat of kicking off a Stonewall Riot in the Vauxhall area seemed to have been averted by police tactics of, er, handing out small leaflets and treating all the presumably wide-eyed clubbers rather gently - and with perhaps a wry smile on their faces. This was also perhaps helped by cramming Vauxhall with hundreds of police officers, sniffer dogs and vans as far as the eye could see.

The operation had been planned for 3 months, and seems to have been aimed at the club and a small number of individuals rather than the clubbers. There were 9 arrests, 5 men charged with 57 offences. 57! Heinz would be proud.

In a busy period for all things gay, the new Equality Act came into force today, banning discrimination "in the provision of goods, facilities and services". This means that gay couples can't be turned away from the capital's hotels. We think it may also mean that straight people can't be turned away from the capital's gay clubs - a problem that FIRE won't have to grapple with until it's allowed to re-open. So don't try going to test the law for the few days...

As part of the BBC's coverage of the new gay rights laws, they interview Ian Burford and Alex Cannell, partners for 45 years who recall the dark days when "attending a gay pub could provoke a police raid and arrest". Those days aren't entirely over, then.