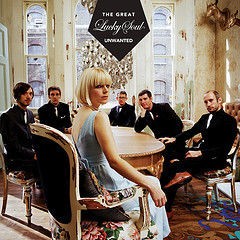 Lucky Soul, a band we love so much we're afraid we'll be served with an injunction if we gush about them any more, play their biggest gig to date when they headline at Bush Hall on 16th May. Tickets are a bargainous £7 (available online at We Got Tickets).

It's a great opportunity to catch a band very much on the up, as they celebrate the rave reviews being served on their debut album, The Great Unwanted. They sound great on record, but are well worth catching live, if only to fall under the spell of the lovely Ali Howard...

Of course, we can't let any Lucky Soul activity go by without giving you the opportunity to blag some stuff for free. Up for grabs this time are a pair of tickets to the gig at Bush Hall and a copy of the album. We are far too good to you.

To get hold of these prizes, just fill in the form below with your details and your answer to this question:

The name of Lucky Soul's album is:

A. The Great Unwashed

B. The Great Bear