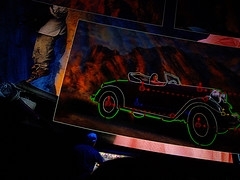 The Optronica festival took place last week, and Londonist was lucky enough to get tickets for the sold-out session on Friday evening at the BFI IMAX, where we were treated to video mash-ups by festival programmers Addictive TV, and a reactive retelling of Peter Greenaway's Tulse Luper trilogy by the director himself. It was easily the trendiest thing we'd been to all year - possibly ever - as proved by the high proportion of 'media specs' (black, thick-rimmed) worn by the other audience members.

First act of the double bill, Addictive TV's set was simply great fun, as VJs and remix fiends Graham and Tolly did their thing - see their YouTube profile for a couple of examples of their style. In an interview with PingMag, Graham explained Addictive TV's philosophy thus:


"In film and television, music is used to enhance the pictures. Whereas in AV, pictures are used to enhance the music. For us, the blending of the two or even being able to see and hear the link between them is very important - whether the pictures are film-based or motion graphics. To us, with the kind of work we do, the whole AV movement is really a natural progression of the remix culture applied to both music and images.

"[...] Optronica is simply a visual music festival, focusing on the convergence of music and the moving image, working with artists in this field who often don’t fit easily into the program of other standard music festivals or digital arts/film festivals events, where music program isn’t really a strong part of what they do."

In practice, this meant an hypnotic set that wove together scenes from films as varied as Get Carter, Crouching Tiger, Hidden Dragon, Amélie, Through A Scanner Darkly, City of God and anime Tekkon Kinkreet, taking a phrase here, an action there, and repeating/intersplicing them to the backing of a VERY LOUD beat, made up equally of 'found' sounds from the films and (bear with us here, metal is more this Londonista's speciality) sort of house-y music that made us think we ought to have been dancing rather than sitting passively in the IMAX's super-comfy seats. We particularly enjoyed the almost sadistic section focusing on the fight between Yu Shu Lien (Michelle Yeoh) and Jen Yu (Ziyi Zhang), where a metal staff smashed floor tiles with oppressive regularity, a blunt counterpoint to the fluid elegance of the combatants, the motions fusing with the powerful accompanying music. We could have watched for hours.

Next up: Peter Greenaway, one of the few 64-year olds in the world to have a MySpace, remixed his 'challenging' Tulse Luper films (1, 2, 3) into an hour-long visual soup of suitcases, Nazis, naked people and babies, all of which purportedly had something very significant to do with uranium. 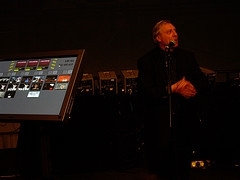 Now, we were unfamiliar with the oeuvre of Peter Greenaway before seeing his VJ set; a friend who attempted to explain his stuff used words like "iconoclast" and "visionary" and "unafraid to confront the boundary between spectator and spectacle, while problematising their relationship through undermining of the traditional hierachical filmic vocabulary" until our eyes glazed over a little bit. The Tulse Luper works, on their most basic level, follow the progress of the eponymous hero across the 20th century and sum up his life - and "represent the world" - through the contents of 92 suitcases containing items like drowned corpses, money, women's underwear, ink and blood, maps, and a baby (#15). We won't even go into the mischievous semi-autobiographical elements of the works, and the link to uranium, atomic number 92, because to do so thoroughly would require a monograph - suffice it to say that Greenaway had plenty of material to play with when choosing the clips that would make up his interactive VJ set.

"With an intense musical backdrop provided by Anglo-Dutch DJ Radar, Greenaway mixes and juxtaposes elements from the 92 Tulse Luper 'stories' via a purpose built touch screen interface, orchestrating a multi-stream spectacular on the biggest screen in Europe.

"Reimagined as a 'real-time image conductor', with this show Greenaway liberates himself from traditional cinematic linearity and adds another intriguing chapter to the vast 'Tulse Luper Suitcases' phenomenon, his most enigmatic and ambitious project to date, one that he himself calls '...a social and political manifesto about the future of cinema'."

The touch-screen control panel thing looked like it was great fun to use, and Greenaway caressed it affectionately, moving clips from one of the three 'boxes' on the IMAX screen to another, stopping and starting snatches of film at will. Having spoken of his desire earlier to make a new language for cinema, and to make films which changed every time they were shown, on Friday he appeared to be one step closer to his goal. As stated before, this Londonista was nearly utterly ignorant about the art of VJing before Optronica; we still are, but having tried it once we're keen to immerse ourselves in it once more. Maybe next time we'll have more of a clue as to what the hell was going on.