Typo and Jump: Home and Office In Theatre This Week

By Hazel Last edited 188 months ago
Hazel Typo and Jump: Home and Office In Theatre This Week 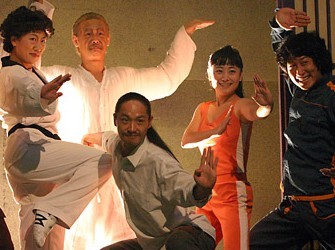 Opening tomorrow at the Tristan Bates Theatre and running until 24 February is Typo by Theatre Trash. This two-hander is a black comedy exploring workplace paranoia and the intricacies of office life, last seen in the Reveal Festival at Artsdepot in April last year and before that in its debut at the Camden People's Theatre. Performed by Theatre Trash founder Ria Parry and associate artist Ben Watson, the play was devised by them with co-founder Liam Jarvis and director Ceri Turnbull. This young, dynamic theatre company have had consistently good reviews, go and see them so you can say you saw them first.

If you'd rather explore the complexities of family lie thorugh the medium of Korean martial arts, then book your tickets for Jump, the Korean family fighting freak-out that was seen this time last year in London at the Peacock Theatre as part of the London Korean Festival, and then blew everyone away at the Edinburgh Festival and around the world when the team toured internationally.

Opening tomorrow night and running until 14 April at the Peacock Theatre again, Jump is a non-verbal comedy about a Korean family under the thumb of their super-traditional grandfather. A daughter's marriage, a surprise visitor and two useless burglars creat the narrative but its not so much what the story is as how it is told. Taekwondo, Taek-gyun, acrobatics and precision choreography are all used to push this comedy along.

We're imagining it's a live action Korean Simpsons with no words, just lots of king fu action and the kind of comedy that you'd get if Mr Bean moved in with Mr Miyagi. If that doesn't get you booking, we don't want to know you.