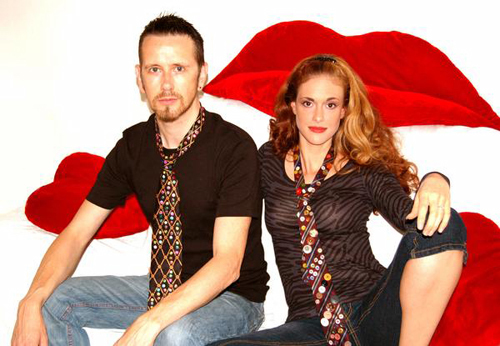 In January we saw string duo The McCarricks working a double shift - opening up Kristin Hersh's Arts Theatre show with their own original blend of atmospheric beats and lush orchestration set to dark, moody visuals and playing in Kristin's band. We were so impressed we simply had to find out more, so Martin and Kimberlee answered our questions via email.

Can you tell us the the brief history of The McCarricks?

To be honest – it’s all my sister's fault. She’s an artist living in Germany and back in 2002 she asked us to take part in a show for a gallery that she curates in Heidelberg. We’d been discussing the idea of doing a project that combined music and visuals for a while and this kind of kicked us into action. If we’d known then that we were opening Pandora’s Box we might not have been so eager! Initially we thought of using old silent movies as a backdrop but legal nonsense with usage became a pain, so we tapped our talented film maker friends who created wonderful and unique short films that were tailored to the music we wrote. Thus started The McCarricks! It’s been a weird and wonderful journey so far.

Do you find playing as a duo to your own backing tracks affords you more freedom than if you put a band together to play with?

Not necessarily more freedom - but it does make things simpler. The show is just the two of us with a violin and a cello sitting in front of a cinema screen – it’s very intimate and for now it feels like it needs to be so. At some point it would be interesting to branch out – get a drummer maybe, but for now the power is in the fact that it is just the two of us. I love it that people think we’re going to play a twee violin and cello piece along with some pretty visuals and then we hit them with something more akin to an audio/visual maelstrom! We keep the backing tracks fairly sparse so that the music is still very much driven by the violin and cello but we use recorded sounds to add emphasis to the atmosphere. We like to feel that we’re part of the film when we perform live – it might divert the attention too much if we had a guitarist moshing about the stage.

What made you decide to make visuals an integral part of your writing and performances?

To us, music is naturally very visual and every image has its sound. Working with film was something we’d discussed since we’d met so we explored it a little and found that it really suited us as a medium. The music also works on its own but adding the films ‘live’ creates a great backdrop which lends even more atmosphere to the music. We’re naturally drawn to the ‘darker side’ when it comes to imagery which is why we use contortionists and strange almost nightmarish characters, but music has a strange ability to change what the eye sees and due to the nature of our music - an odd beauty has managed to creep into the films all on its own. Our main film collaborators PG LOGO always surprise us with the films they make for us which means this project is a constant revelation. We never know what visual treats we are going to end up with.

What comes first - the musical idea or the film to put music to? Under what criteria do you choose films to include in your shows?

In general we write the music first and then create the film, but with something like ‘Bend’ we managed to fit some old footage of slow motion contortionists to music we’d already written. Our show runs almost like a dream sequence – the films change quite dramatically in look from one to the other but there are elements of each running through all of them. Sometimes it’s a character from one film that will crop up in another, or a building, or an alleyway. In one way or another they are all linked. Our current show is called 'Music from the Third Floor' and the number 3 crops up continuously throughout the films.

What is it about Norman McLaren’s films that made you want to play music to them?

The idea to use the Norman McLaren films was at the suggestion of The Horse Hospital who were keen for us to score music for some of his work. His animation is amazing and even more so considering it was done back in the 1940’s and he had no camera so he painted directly onto film. Films made without cameras? We had to give it a go!

Martin, you've been playing in 'alternative' bands for years (including This Mortal Coil, Siouxsie & the Banshees, Oceansize and Therapy?) - were you ever interested in the 'traditional' world of string music?

Are you saying that I’ve been ‘around the block’ a bit? The cheek of it..! Actually, the Oceansize record was Kimberlee and I and it was a one off recording but yes - I’ve been lucky enough to work with some really great artists: touring, recording, arranging etc and collaborating with other people is really important to me which is why I love doing string arrangements. It’s great to work on a record that you really dig. It’s the creative process made easy because someone else has done all the work. My studies were in classical music – piano, cello, composition…..but secretly I just wanted to be Mick Ronson (from the Ziggy Stardust years). I wanted to make that sound. In my final year at the Guildhall School of Music and Drama I started to work doing cello sessions and string arrangements for the likes of This Mortal Coil, Marc Almond and Siouxsie and the Banshees which confirmed my growing doubts that orchestral work was definitely not the path for me. I’d now love to write for an orchestra in the more traditional sense. And harps… we really want to work with harps.

What's it like writing and performing such intense music with someone you're married to?

Ha ha. There are those that have this romantic notion that we sit about happily composing melodies on manuscript paper by candle light, and there are those that think we spend our time chained up in some creative hell smashing chairs over one another’s heads. The truth is that it actually feels very natural whether we’re writing or performing and we seem to work off one another without creating any unnecessary artistic tension. That’s not to say it’s easy – we agonise over the tiniest details. Kim sends me to the pub so she can write her violin parts without constant interruptions. It’s the perfect solution for both of us.

Have you ever had to do a show mid-argument?

It’s never happened so far. We’re usually far too busy before a show to think about arguing.

You're about to embark on a European tour with Kristin Hersh (whose new album, "Learn To Sing Like A Star" heavily features the duo) - will this be the first time The McCarricks have toured? Are you looking forward to it?

It will be first time we’ve toured properly as The McCarricks so it’s really exciting. I toured with Kristin for her 'Hips and Makers' album tour – just the two of us on stage - and it was such a great experience. I think we laughed our way across the whole of Europe. We only had two short rehearsals with the new band for the show at The Arts Theatre but we gelled immediately. We can’t wait!

What would your ideal day out in London consist of?

We’d walk somewhere! It’s something that we do without meaning to. We’ll go out to buy milk and end up walking for three hours. We’ve discovered some amazing locations for our films just by wandering aimlessly through the city. London’s real treasures are hidden away in those winding streets. Victoria Embankment Gardens is one of our favourite places – a thin and crooked little park hidden behind some trees on The Embankment. It’s the only park that has a statue to commemorate the men that rode camels during the war known as the Imperial Camel Corps. If that doesn’t get you dashing down there we don’t know what will! The down side is that we always seem to attract tramps who want to be our friends.

And ideal night out?

Perfect night out is simply anything that involves our friends – they’re an entertaining lot.

What bands/artists are you listening to at the moment?

We listen indiscriminately. For some reason it no longer feels necessary to keep abreast of whatever scene is current. A typical day can see us as listening to Elliot Smith, followed by Queens of the Stone Age, followed by The Killers, followed by the Philip Glass violin concerto. We listen to a lot on My Space too – people seem to love or hate My Space but either way you can find some great music up there.

And if you could only recommend three films that would change our lives, what would they be?

Only three films to change your lives – that’s a tough one.

Kimberlee – 'The Reflecting Skin', 'Requiem For A Dream', 'The Cook, The Thief, His Wife And Her Lover'.

What else does 2007 hold for The McCarricks?

Well, the European tour is fast approaching and there’s talk of going to America too. And there’s potential over a fairly exciting film score on the cards. And recording! We’re really keen to play live as much as possible. It all seems as if it has its own momentum at the moment and it’s very positive so we’re just hoping to “go with it” as they say.

Kristin Hersh and The McCarricks play Koko on March 7th.

Image courtesy of House Of McCarrick.