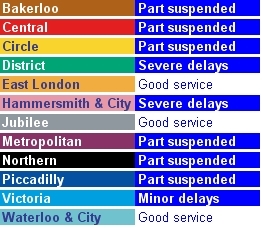 King's Cross train station has been closed and evacuated, the National Rail Enquiries woman tells us - due to bits falling off the roof. All mainline rail services from King's Cross have been cancelled.

London Bridge is partially closed. Apparently - according to a forwarded email from a friend who works nearby - bits of the roof there have fallen off too. Update: Thanks to commenter Caspar who says London Bridge is still sort-of working - "It's just the front entrance which has been closed at London Bridge, you can still interchange there and access the underground, you just can't get out of the main doors."

Note to Railtrack or whoever the hell is in charge of stations in these privatised days: Why not build infrastructure that won't, you know, blow away?

Lord's Cricket Ground has lost part of its roof. Picture on the beeb.

There are partial suspensions and severe delays on pretty much every Tube line - so check before you travel! TFL phoneline: 020 7222 1234 (but good luck getting through as the lines are very busy).

National Rail's live departure boards are currently down - probably due to demand - so for train info call 08457 484950.

The Millennium Bridge is closed to pedestrians. The BBC says: "Police were keen to stress the decision was not based on "structural reasons" but rather the risk of pedestrians being blown into the river."