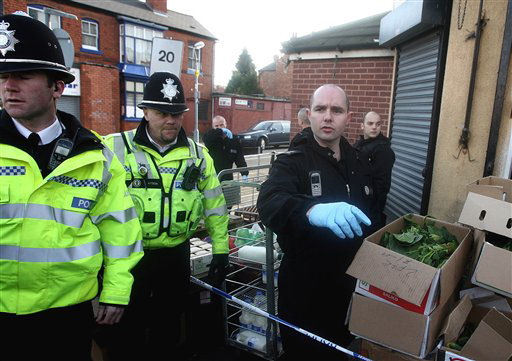 Nothing much on the old London terrorist radar today so let's have a quick gander at the rest of the country. Oh look, they've arrested nine people in Birmingham:

The "significant" operation involved police and the security service MI5. Security sources said a terror plot not aimed at mass casualties would mark "a different approach" to UK terrorism.

Crap, we don't like the sound of that. It's a little too much like when the Borg adapt. Judging by the photo the police are leaving no leaf unturned.

Earlier, BBC Home Affairs Correspondent Daniel Sandford said sources close to the investigation said the aim of the alleged plot was to kidnap a serving member of the armed forces, perhaps while they were on home leave. He stressed the arrests were based on intelligence, which could prove to be wrong.

Sucks to be a soldier. First we send them where they have no place being and then they're not safe once they finally get home.