Premiership: A Giant Leap Through A Closing Door 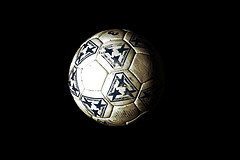 Sixty seconds on BBC Radio Five Live yesterday lunchtime beautifully encapsulated what English football is currently going through. The first forty-five seconds consisted of pained hand-wringing about foreign ownership, fans becoming increasingly helpless in the face of billionaire consortia and the increasingly predictable pecking order at the top of the game. The melancholia was then abruptly curtailed by a rousing fanfare behind an excitable presenter’s voice declaiming:

Good afternoon and welcome to Stamford Bridge for the battle of London’s Premiership heavyweights!

Whatever sympathy we may have over fears for English football’s soul we’re certain that the last few weeks of club takeover action has finally triggered an irresistible gold rush that will sweep emotional arguments into the dust. As Rogan Taylor, Director of the Football Industries Group at the University of Liverpool, put it the other day, also on Five Live, in the light of the proposed Middle Eastern takeover at Anfield:

We’re on the bridge of a spaceship heading for Planet Megabucks and there’s only a limited number of places.

That analogy probably wasn’t off the cuff. The world’s business moguls have to project at least a veneer of sporting interest to limit supporter protest, but none of them are investing in football simply because they fancy a glamorous new toy. Well, alright, maybe Mr Abramovich is, but the rest expect to make some money. And they don’t like risk. If you pay £50m for a ticket to the moon you are unlikely to be amused if, before you can escape the earth’s atmosphere, you are jettisoned to the ocean below in favour of someone penniless, but fitter and more technically proficient. The seats on the Good Ship Premiership are being snapped up fast and we suspect that those already on board are waiting eagerly to pull up the ladder.

We predict that within five years promotion and relegation to the Premiership will have been rejected in favour of a system of re-election just like the one in operation between the Football League and the semi-professional game that existed until 1987. Elsewhere in British sport, Rugby Union's newly professional English game has only recently denied promotion to its top flight on the basis that the candidate didn’t meet non-sporting criteria, and the same occasionally happens in Scottish football.

But wouldn’t there be howls of protest? We doubt it. Further hand-wringing would be more likely. Since the mid-90s it’s been generally accepted that about two-thirds of all football fans in England support a Premiership team. Furthermore, more than half of them support one of around half-a-dozen clubs including Arsenal, Tottenham and more recently Chelsea. It’s next season's television money bonanza that’s fuelling outside interest in the game and, sadly, Charlton v. Watford pulls in a fraction of the audience of Chelsea v Arsenal. As now, most fans would say “Yeah, it’s very sad, but what can you do? Anyway, can’t stop. I’ve got to get a seat in the pub for Spurs – Man U…”

Some might even believe the Premiership would be doing lower division teams a favour. Joe McLean, football analyst and partner at the financial advisers Grant Thornton, already thinks some Championship teams are in danger of extending themselves so far to reach and then stay in the elite that they are inviting oblivion. And it’s not as if the Football League would die. Football outside the top four divisions still thrives despite being denied direct access to comparative riches for decades and even now it’s often the teams relegated from the professional ranks that bounce straight back from a trip to the Conference. Some initial largesse from the lucky spaceship passengers would doubtless help to win over any lingering opposition from below.

Here in the capital, West Ham’s new owners are playing two hands. If they stay in the Premiership, fine and dandy, but if not there’s the possibility of moving into the Olympic stadium in a few years which might allow the lucrative sale of their existing ground. Fulham, lest we forget, already have a rich, foreign benefactor and have had for some time, though even he must be wondering whether to twist or stick in the current environment. Should relegation come, Watford will probably be thrilled with the financial security they’ve already won for themselves, but Charlton, half way through their seventh consecutive season in the Premiership, must be reflecting that this is an extraordinarily bad moment to be on your hands and knees scrambling around for your boarding pass.