By Jo Last edited 161 months ago
Jo Killing With Kindness 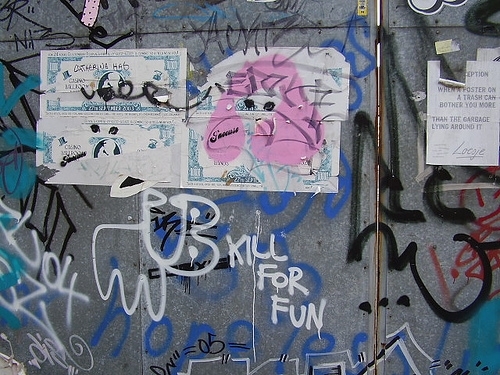 We love assassins at Londonist. Well, maybe not ones who kill with actual weapons - that's rude, and downright unBritish - strictly the non-violent kind, of course. So when we heard about the Cruel 2 B Kind game via the B3ta newsletter, we squealed with joy. In a dignified and measured manner, of course.

The point of the game is to slay with sweetness, to murder with mildness, to terminate with tolerance, to assassinate with affection (thanks, Thesaurus.com):

At the beginning of the game, you and a partner-in-crime are assigned a secret weapon. To onlookers, it will seem like a random act of kindness. But to a select group of other players, the seemingly benevolent gesture is a deadly maneuver that will bring them to their knees.

Some players will be slain by a serenade. Others will be killed by a compliment. You and your partner might be taken down by an innocent group cheer.

You will be given no information about your targets. No name, no photo, nothing but the guarantee that they will remain within the outdoor game boundaries during the designated playing time. Anyone you encounter could be your target. The only way to find out is to attack them with your secret weapon.

Watch out: The hunter is also the hunted. At the beginning of the game, you and your partner will also be assigned your own secret weakness. Other pairs of players have been given your secret weakness as their secret weapon, and they're coming to get you. Anything out of the ordinary you do to assassinate YOUR targets may reveal your own secret identity to the other players who want you dead.What a brilliant concept: Spreading a bit of joy in this city so often criticised for its unfriendliness, with all the thrill of the hunt, too. If it sounds like your cup of arsenic-laced tea, get yourselves down to the game taking place in London this Saturday:

Photo courtesy of Mondoagogo via the Londonist Flickr group.