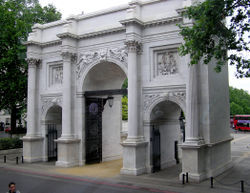 A story we missed from yesterday evening:

A murder victim's body has been found on the Marble Arch traffic island, one of London's busiest junctions.

The man suffered head injuries and was dead when paramedics arrived at 3am this morning.

By late afternoon his body was still on the island at the top end of Oxford Street as forensic scientists looked for clues.

The victim is yet to be formally identified, however "a man in his 40s was arrested in connection with the murder."