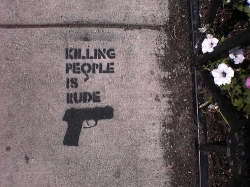 Another first-person article. I promise it's not the start of a trend! Normal service resumes after this post.

I wrote an angry, personal opinion post on Monday all about how my friend Phil the physicist goth (part-time goth, anyway) was fined £80 by police for saying their metal detector was "a piece of shit that wouldn't stop anyone". I realise that some people find four-letter words offensive, and I moderate my language in public (unless I'm running really late and the stairs to the Central Line at Bank are blocked by tourists with huge bags disregarding the 'Keep left' signs) to a certain degree, but I find it hard to believe that, in this day and age, anyone is hugely offended by the word "shit". In my opinion, and please bear in mind I am not an expert on these matters, and this is only my opinion, the reason Phil was pulled over, and he and I were threatened with arrest, was because he had questioned the efficacy of the detection barrier, rather than because anyone in the vicinity was hugely offended. The policeman in apparent charge of the fining - may I add here how abrupt, unpleasant and aggressive he was, points Phil and I will be making to the IPCC - told us that "the language you used was inappropriate for an area where there are children", which was just breathtakingly bizarre, as a) we were hardly shouting, and b) I don't recall seeing any nippers running around the station in any case. The "Oh, but think of the children!" excuse doesn't really wash.

Anyway. There was a great response to the original post, and thank you to everyone who had their say, even if it was to disagree with me; unlike the Met, I don't feel excessively threatened or hurt when people criticise me, even if they use good old-fashioned Anglo-Saxon words, as it's always refreshing to have your views challenged. Thanks especially to "Watching Them, Watching Us" of Spyblog for the (justified?) paranoia, and to MikeyK for opening my eyes about police threats to arrest you when you're being obstreperous.

The incident was picked up by The Register (Phil, as a self-confessed techie, was thrilled to make the front page) where the author made the very good point that language directed towards a metal detector is unlikely to cause the subject offence, as it is, ah, an inanimate object. Today, I'm a page 3 girl in Metro, although I'd like to point out that Londonist is most definitely a team effort, ably led by our dear Editro, Rob, and not 'my' blog as the article seemed to imply ... There's also a poll on their front page which would seem to suggest that if swearing on public transport or in tube stations is punishable by a fine, then at least 75% of us owe the police a lot of dough, and roughly 25% of the population are liars.

Regarding follow-ups, I'd love to hear from anyone who has experienced anything similar. There was a piece in The Times the other day about stallholders selling a "Bollocks to Blair" t-shirt, who were also slapped with the £80 penalty; are these isolated incidents or indicative of a wider trend? That's what is really worrying to me, and to many of the people who left comments. In the comments to my original post, "kath" linked to an excellent article she wrote over on freecommonwealth which brings together yet more examples.

As soon as Phil gets a reprint of his ticket (he lost the original through over-enthusiastic moshing at the My Ruin gig), he's going to appeal, and, as mentioned above, we are going to make a complaint to the IPCC under the terms of the Police Code of Conduct. Section 3 seems particularly relevant:

3. Officers should treat members of the public and colleagues with courtesy and respect, avoiding abusive or deriding attitudes or behaviour. In particular, officers must avoid: favouritism of an individual or group; all forms of harassment, victimisation or unreasonable discrimination; and overbearing conduct to a colleague, particularly to one junior in rank or service.

I'll keep you updated, and thank you to Editro for allowing me space on this fine website to rant a bit.

Picture from theres no way home's Flickr photostream, with many thanks. Sticks and stones may break my bones ...