Freedom Of Speech Does Not Extend To Criticising The Police

By Jo Last edited 167 months ago
Jo Opinion: Freedom Of Speech Does Not Extend To Criticising The Police 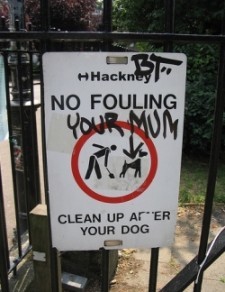 Note: I am breaking with the Londonist 'no first person singular' rule thing because this is an account of a specific incident that affected me and may not represent the views of the entire Londonist team. Also, this post contains naughty words that might warp your fragile little mind; be warned!

I read Thursday's edition of the Independent - the article that could get you arrested - and was vaguely worried by its evocation of the insidious loss of civil liberties, especially infringements on freedom of speech. (In fact, the article almost did get someone arrested.) As a law-abiding citizen, though, I didn't think that I or anyone I knew would be affected by 'terror creep' – the use of the threat of terrists [sic] to stifle criticism of the government and its methods of security enforcement – any time soon. How wrong I was.

My friend Phil and I were going through a metal detector on the way out of Highbury & Islington tube on Friday evening around 8.30pm, on our way to a gig. Phil, who has a degree in physics, said to me in a low voice that the metal detector was a "piece of shit that wouldn't stop anyone". Obviously, someone was listening, as all of a sudden, half a dozen policemen jumped on him and hustled him over to the corner of the tube station, where he was detained for about 20 minutes for the grave crime of swearing in public, and fined £80 for the privilege. For swearing! On the tube! If it's such a crime, then I owe them about a million pounds, as swearing on and at the tube is the only way to deal with the pain of having to travel on the dratted thing every day.

The police were fucking rude, too, and treated Phil like he was a hardened criminal - they were really aggressive, and clearly wanted him to lose his temper so they could charge him with something worse. They said repeatedly he was very close to being arrested. For the terrible crime of swearing and calling their machine a piece of shit - which, as a physics graduate, he actually knows about. Phil co-operated fully and gave them every piece of ID you could think of, and allowed them to search his bag, but that wasn't enough for them - they just had to keep on firing questions. I got really upset and started crying through rage, frustration and fear. I also asked them very politely if this was the UK or the People's Republic of China. They then told me I was very close to being arrested, too.

I'm just glad a local reporter for the Islington Tribune was there and documented the whole thing. Lots of the other passengers who witnessed the pulling-over came and told me how unfair and heavy-handed they thought the police were being, which helped somewhat.

For fuck's sake (oh dear, there goes another £80!). Would wearing a Cradle of Filth t-shirt (WARNING: link is NOT WORK SAFE, picture found on the Peelified forums) be enough to be pulled over and cautioned? How about if I were to quote Philip Larkin's famous line about parents ("They fuck you up, your mum and dad")? Is that not covered by freedom of speech any more? Or were they just fucking with us because we were dressed in goth clothes (oooh, controversial!) and criticising their anti-terrorist machine? I wonder.

Of COURSE stopping suicidal idiots with bombs is justifiably the focus of the police's efforts, as well as protecting the public from ordinary, run-of-the-mill criminals. Of course, they should go to every effort to stop future attacks like the disgusting, cowardly bombings that cost 52 innocent lives almost a year ago. However, I fail to see how fining my friend £80 for the despicable crime of questioning their methods via the use of a four-letter word is making Britain safer. Hands up if you've never sworn in public. Anyone? Anyone at all? Well, watch out – power-tripping police with nothing better to do might decide they don't like the look of you (it took five officers twenty minutes to write up the offence, and to ascertain that Phil is who he says he is – that's over an hour and a half of police time that could have been used to make our streets safer).

I suppose at least we can be grateful Phil isn't a Brazilian electrician. We're looking into a possible appeal, too.

Oh, incidentally, the gig - My Ruin at the Highbury Garage - was excellent. My photos of it are here. Shame it cost £80, though.

Thanks to Londonist Mike for pointing me in the direction of this (video is full of POTTY LANGUAGE, BEWARE!). It pretty much sums up how I feel about the whole thing.

I reckon I owe the Met around £480 quid for this piece. Oh dear!

Picture of foul language courtesy of Dan K, with many thanks.

UPDATE: Hello to everyone reading this who arrived via the kind plug in The Register. Fame at last!