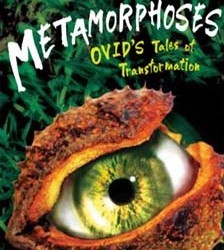 There's been opera, dance, film and... weird stuff on bendy poles to keep London busy and out of doors. And now there's Metamorphoses in the park courtesy of London Bubble, the theatre-makers with a reputation for "inventive and unpredictable events that reflect the diversity of our city and its people." It doesn't get more diverse than this year's summer tour of London's parks.

Naiads, nymphs, animals, men, women, gods and goddesses all make appearances in the company's re-telling of Ovid's mishmash of Greek and Roman myths - and as well as figuratively allowing yourself to be led by them into the realms of myth and legend, you need to literally allow yourself to be led by the actors and the music and action going on around you. These summer tours of London's parks are no Glyndebourne complete with gourmet picnic hamper: be prepared to walk with this show as they promise audiences that "London Bubble's team of fearless theatre makers will lead you over the earth, through the trees and under the firmament to tell tales of the spirits caught within nature, and the natures of the gods who transformed them."

For more information and to book, go to the London Bubble website here.