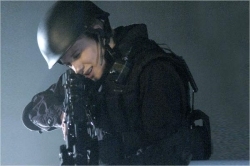 Oh no, not more sport! At the risk of sounding like a skipping CD, this is getting ridiculous. With Wimbledon added to the surfeit of sporting action on the small screen, there's even less room for actual, interesting programmes than ever. Summer of sport our collective arse (excluding our beloved sports desk of course!). Come, friendly clouds, and pour down rain on Wimbledon until the sexist pigs who run the thing are made to give up and we can return to normal programming.

In a move unprecedented on Londonist, we are going to thank a man we loathe: Rupert Murdoch. Ugh - just typing that made us feel dirtier than a rent-boy after a visit to Mark Oaten. Now, for the 0.05% of Londonist readers who haven't closed their browser in disgust, let us explain why: Sky 3. It's on Freeview, and it's just started showing Battlestar Galactica (Thur 9pm Sky 3 - first episode was last week) which, we are reliably informed, is actually pretty damn good. Regular readers (hello, Mrs Trellis) will know we love sci-fi that isn't Star Trek (even the Dominion War - the Trek story arc that got closest to interesting - was about as appealing as the picture of Nikki from Big Brother's minge we've seen floating around the internet - and no we aren't going to link to it, you sick fucks) or Farscape (do we even need to back this one up?), so the premise of BSG - fleet of ships containing the last remnants of the human race, pursued by killer robots, desperately searching for the planet Earth - sounds fab. Much as how the Star Wars Expanded Universe books got a million times better when everything went to hell in a handbasket thanks to the Yuuzhan Vong, we like our sci fi best when it's not afraid to kill people off. The Amazon review of BSG's first series is similarly encouraging:

With remarkably consistent quality, each of these 13 episodes deepens the dynamics of these fascinating characters and suspenseful situations. ... [W]ith the threat of civil war among the fleet, season 1 ends with an exceptional cliffhanger that's totally unexpected while connecting the plot threads of all preceding episodes. To the credit of everyone involved, this is frackin' good television.

The rest of the schedules are a bit body-centric this week, as C4 start their series following the poor sods on the heart transplant waiting list (Who Gets The Heart?, Thur 10pm C4) as well as telling us How To Look Good Naked (Tue 8.30pm C4), which apparently isn't another 10 Years Younger-style Schedenfreude session sponsored in spirit by BAAPS - how refreshing. We can't decide whether Who Gets The Heart? is expoitative or not, given that there's a fair chance that some of those featured won't survive to the end of the series; but maybe anything that will raise the chronically low levels of organ donation in the UK is justified. It's really easy to sign up for a donor card, so why don't you do it right now?

If there's one person we hate more than Murdoch, provision of BSG notwithstanding, it's Mark Thatcher, the obnoxious, over-privileged, odious, oleaginous offspring of Handbag-Snatcher Thatcher who got in a spot of trouble in Equatorial Guinea; consequently, we're half-dreading, half-looking forward to Coup! (Fri 9pm BBC2), which tells the story of how the fat baronet allegedly helped to finance a bid led by Simon Mann, a mercenary, to kill the Guinean president and take over the oil-rich state. At least there will be lots of pantomime-style villains to boo, if no real heroes in the sorry story.

Villainy on a grand scale too in Horizon: We Love Cigarettes (Thur 9pm BBC2), about the global tobacco industy. These days, even the Marlboro Man of Fallujah is cutting down; is this the end of the road for the love of the fag (no tittering at the back, please)? Well, given that the front page of Metro today told us that Britain is now the cocaine capital of the EU, perhaps it does. Well, as London is clearly the sin capital of Europe, it's a good thing we're not sitting on top of an active volcano with an angry god looking for ways to punish this modern Sodom. That's a rubbish way of linking to our last choice this week, Pompeii ... Live! (Wed 8pm Five). We're wondering if they've got a camera trained on the crater as an avant-garde reality show/boredom experiment, or if they mean it as a command; maybe THE Pompeii, Caesar's nemesis Gaius Pompeius Magnus, will hear the call and rise from the grave or ... OK, it's a documentary about the eruption, but we can always hope.