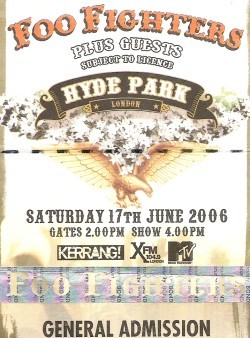 What could be better than going to a lovely park on a hot summer's day to listen to some nice relaxing music? Well, nothing, apart from the 'relaxing' part – this Londonista likes it LOUD. The louder, the better. So Saturday's gig in Hyde Park was right up our street – two of our favourite bands, and at least three musical legends for good measure. Add some beer and it's the recipe for a perfect day – or would have been, had the organisers not taken away entirely the wrong idea from Live8, on which more later.

Anyway, having had previous experience of the fascistic drink-confiscating policies of any outdoor musical event associated with a certain type of beer beginning with 'C' for 'cat's piss', and not being at all fussed by the first two names on the line-up (Juliette And The Licks and Angels And Airwaves - sorry, guys), Londonist and friends decided that by far the better plan was to sit outside the gig, drink beer from the Sainsbury's next to Marble Arch, and wait for the acts we actually wanted to see to come on, before we ambled into the concert area proper to gawp at the nuns and to wonder how water can be gendered.

When Queens Of The Stone Age opened up their set with First It Giveth, it was worth the wait – one of our all-time favourite QOTSA tracks, it got the crowd singing along full-throatedly and in good cheer. We hardly even missed Nick Olivieri, booted from the band for those good old "personal reasons" (or was it for beating up his girlfriend? Nice), and last seen by us wearing a beard, a bass and a big grin at Leeds 2002. However, after a good start, something just didn't quite click for us – QOTSA were not as compelling as we know they can be. It was competent but not inspired. The sound wasn't great, either – it wasn't nearly loud enough. Intermittent chants of "TURN IT UP!" from other sections of the crowd confirmed that we weren't the only ones deprived of the bowel-trembling bass and volume wall-of-sound experience that is, for this Londonista at least, the whole point of going to an outdoor rock concert. Even worse, the existence of the dreaded Golden Circle was a real atmosphere-killer. As a bog-standard ticket holder – we weren't aware there was any other kind, it's an outdoor gig, for fuck's sake – we were unimpressed to say the least to discover that if we wanted to get within squinting distance of the stage, we needed some kind of magic super ticket. Whatever happened to the egalitarian, all-mucking-in-together spirit that is the best part of live music? What happened to suffering through support acts to secure a prime spot just in front of the stage? Whatever happened to rock'n'roll?!?

The QOTSA set left us feeling bloated yet somehow dissatisfied – the feeling you get after eating an entire bag of Haribo Tangfastics. However, Motörhead delivered the roast-beef-and-Yorkshire Sunday roast sound we'd been craving – and sounded distinctly louder than QOTSA too. Not being a Motörhead aficionado, Londonist can't really comment on the set with any kind of authority whatsoever, but the Hell's Angel types in faded tour t-shirts around us were ecstatic, and the sound was fantastic – consider us converted, to the live sound at least. Lemmy prowled around the stage, utterly in his element, and it was impossible to imagine how anyone could have looked more at home up there.

Dave Grohl and company had a hard act to follow – but manage it the Foo Fighters did, with a set that made this Londonista, a devotee ever since their eponymous debut was released in 1995, cry like a little girl with the sheer beauty of it all. Not having been a fan of the last two albums, we had been bracing ourselves for a disappointment, but by the end of the set we were born-again Foo-fans. Monkey Wrench and Stacked Actors were intense and compelling, with the crowd note-perfect and Taylor banging the drums as though his life depended on it. Even the newer stuff sounded pretty amazing, with a lot more attitude and power than the radio-friendly unit shifter versions.

We bet Dave is rather sick of the "nicest man in rock" tag, but if he will banter with the crowd in between songs ("We started off in London ten years ago in King's College, then the Astoria, now here we are in Hyde Park, and I think this is our best show ever"), then what can he expect? Surprise of the night was when the Foos were joined onstage by Brian May and Roger Taylor – two members of Queen, for fuck's sake! – for a barnstorming We Will Rock You/Tie Your Mother Down, and this after Lemmy had come back up for a guest-vocals slot on the Probot song Shake Your Blood. A legendary night – and the understated power of a partially acoustic, partially heavy-as-fuck Everlong (the best Foos song by a country mile) left the crowd euphoric, and singing their hearts out arm-in-arm with complete strangers (or was that just us?). The high lasted all the way home, and even managed to make us forget a little the sour taste left by the whole Golden Circle controversy and the dodgy sound. That's more of a compliment to the Foos than to the promoters, and we'll definitely think hard before going to a similar event, which is a real shame – but Dave won't be there every year to work his magic.