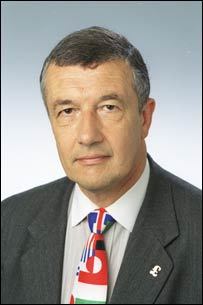 Poor Eric Forth. He died rather suddenly and tragically last week, which came as a great shock to his fellow M.P.s, to whom Forth was a well-liked and revered character. He was a parliamentarian to the core, making speeches without notes, and filibustering government legislation (whilst this can be seen to be purely obstructive, the way he did it was most erudite). Forth's colourful ties and waistcoats reflected his character. He will be sorely missed at Westminster.

However, outside the confines of the parliamentary estate, there seems to be a degree of direspect for the recently-deceased M.P. First, hacks started criticising him in the national newspapers (the articles were evidently written before his death, but not proof-read properly). Now, the Liberal Democrats in Forth's former constituency, Bromley and Chiselhurst, are being strongly criticised by their own leader for starting preparations for the inevitable by-election before the deceased M.P.'s funeral.

Pete Dollimore, Lib Dem London region campaigns chairman, emailed party activists on Monday, telling them they would "act in the normal way out of respect for the deceased and their family", while providing phone numbers and travel advice for activists who may want to help local Lib Dems prepare for the by-election.

"Eric Forth was a friend of mine and I deprecate any effort to begin any electioneering under any circumstances in any byelection until the writ has been moved."

No date has been set for the by-election, but the Lib Dems hope that they will overturn the 13,000 odd Tory majority that Mr. Forth enjoyed in a similar way to their successful ousting of Labour in Dunfermline and Fife earlier in the year. We all know now that they are, at least, very eager to do so.