Are You Watching? (Pun most definitely intended)

By London_Nick Last edited 165 months ago
London_Nick Are You Watching? (Pun most definitely intended) 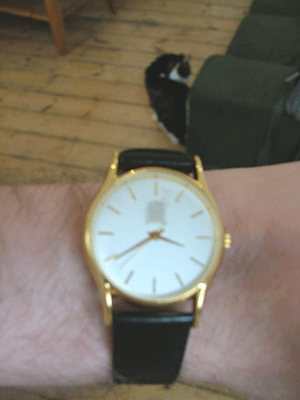 At Londonist, we like to give the people what they want, so, as requested, here is a photo of the House of Commons watch - the prize won by Richard Pope in our local elections competition.

Richard told us that he now hopes to build some sort of Lambeth eDemocracy network off the back of electionmemory.com. Good luck to him, we say!

Richard also shed some light on who "local celebrity" Shane Collins (who stood as a Green candidate) actually is:

"He's a long standing Green activist who puts in loads of hours at meetings and organises the annual green festival / cannabis march in Brockwell Park. He came within 16 votes of getting a seat in Herne Hill in the end. Although the Greens did secure their first councillor in the form of Rebecca Tharackray."

So now we know.