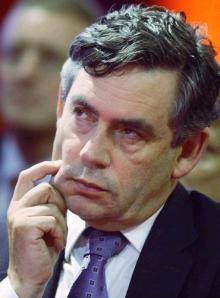 Brown Not Dropped From Campaign Launch

Evidently, the Blair/Brown spat has been patched up: The Chancellor was present at the launch of Labour's local election campaign this morning. Though whether Blair could really drop the man that he personally is touting as his successor from such an important event is doubtful.

The two men have a notoriously rocky relationship, and no doubt Blair's failure to announce a handover date is pissing off the man at Number 11 no end.

One of Londonist's favourite ex-Tory MPs, Sir Anthony Beaumont-Dark, has died at the age of 73. Sir Anthony famously stood up to the Iron Lady, Margaret Thatcher, telling her to stop playing "macho politics" and to "get off her economic high horse". He also coined the phrase "stalking donkey" when describing Sir Anthony Meyer, the obscure MP who ran unsuccessfully against Thatcher for the leadership of the Tory party in 1989.

A spokesman for the party said that Sir Anthony will be "greatly missed ... he was a great Parliamentarian." Londonist will miss him too, but only because he came up with some of the best lines!