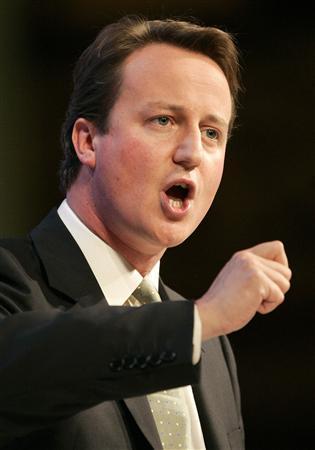 The UK Independence Party have demanded an apology from Tory leader David Cameron over remarks he made on London radio station LBC. Mr. Cameron denounced UKIP as "fruitcakes, loonies and closet racists, mostly" as he took part in a phone-in show on the station.

The comments are further evidence of Cameron's propsed shift of his party from being a right-wing party to being a more centrist party, and are no doubt pre-meditated. They have got him both news coverage, and have made the Tories still more accessible to the middle-of-the-road swing voters.

However, maybe Cameron went too far with the closet racists remark - UKIP, which boasts the Tangerine Twat himself, Robert Kilroy-Silk as a former member (before he formed VeritArse) - have demanded an apology over the remark. Londonist can't see them getting an apology from Cameron, as he has scored quite a few brownie points with the electorate - something that is especially important with local elections next month.

The Tories have caused more controversy be claiming that the new Wembley Stadium is sinking! The company undertaking the problem-ridden contract have denied that the stadium is in fact sinking, but the Tories have written to Culture Secretary Tessa Jowell demanding a public inquiry into the shambles. Wembley, which was meant to be ready this spring, is now not likely to be ready until spring 2007.