"This Is How It Goes Down In LA" 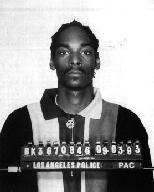 This afternoon, Londonist has very much enjoyed pouring over the lurid details of the fun and games that took place at Heathrow Airport yesterday. Calvin Broadus, Snoop Dogg to we and you, has now been

released "on police bail" and is free to travel on to South Africa, where he'll be performing in Johannesburg on Thursday as part of the country's Freedom Day celebrations (presumably the organisers are not after a family-friendly show, given Snoop's Jim Davidson impersonation at Live Aid last summer).

Yesterday's fracas sounds like a riveting spectacle, with the Doggmeister's 30-strong posse of henchmen flipping out like mentalists after being denied access to the first class lounge. The entourage took out their fury on a duty-free shop, before the rozzers arrived and it all kicked off.

A Heathrow worker, who took photographs from his mobile phone, said: "There were all these huge 20-stone men smashing up display cabinets and throwing people around. I saw Snoop Dogg on the ground, with four riot police trying to put him in handcuffs. His minders were throwing bottles at people".

Thank god they didn't get their hands on the toblerones.

Apparently one of the 20-stoners, after being pepper sprayed and led out by handcuffs, shouted out "this is how it goes down in LA". Well, in fairness mate, this it goes down in St Albans every Saturday night, so there you go. The punchline is that Ronan Keating witnessed the whole thing, having been present in the first class lounge.

No doubt he reminded Snoop that "life is a rollercoaster".