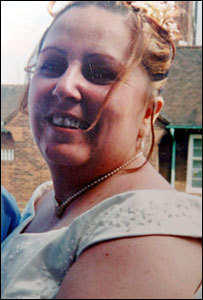 We reported yesterday that a nurse had been stabbed to death at a hospital on the London/Essex border. Well the police investigation is now underway, and despite having no CCTV footage of anything relevant to the attack, two men have been arrested in connection with the killing.

Cheryl Moss, pictured, was brutally stabbed to death in a "frenzied" attack, whilst having a smoke behind St. George's hospital in Hornchurch. A man was arrested last night, but later released without charge. An 18 year old man was arrested this morning, after police found a blue sports bag containing something "significant" to the investigation.

The Officer in charge of the investigation, Detective Chief Inspector Dick Langley said: "We are appealing for witnesses who may have seen a man carrying a blue Nike bag in the area of Upper Rainham Road yesterday afternoon.". The investigation continues.