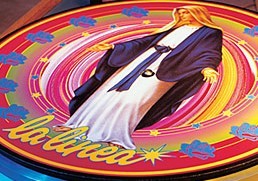 La Linea, the London Latin Music Festival will be held at the Barbican Centre this year and the line-up which starts today is looking good. For six years the festival has been all about defining and re-defining contemporary Latin music, and considering Latin music can encompass flamenco, classical Spanish guitar, Afro-Cuban hip-hop, Argentinian electronica, samba and bossa nova among other forms that's no small task. Previous festivals have brought Gotan Project, Seu Jorge, Pink Martini and Spanish Harlem Orchestra to the UK for their first performances here. If the idea of catching some of the latest Latin music takes your fancy, get booking now.

Tonight's opening artist for the festival is the Mexican singer-songwriter Lila Downs - a Spanish Edith Piaf whose songs of solitude and longing come with a certain New York coolness. Following a few days later is the hot ticket band from Barcelona Ojos de Brujo. Their particular sound and style are described with tantalising lunacy as

"[fusing] flamenco's driving rhythms with hip-hop, funk, punk and other stray sounds snatched from the Barcelona street. The group calls this musical mashup 'Jip Jop Flamenkillo', a sound that catapults flamenco into the 21st century without losing any of the power or passion of the music's roots."

And as if Jip Jop Flamenkillo wasn't enough, the closing night of the festival is a literally banging night of Cuban percussion from Anga Diaz. And by percussion, we're not talking a few wonky xylophones and a pinging primary school tin triangle. Anyone who has been present at the truly ground-shaking effects of a full samba band will tell you, it's a bit noisier - and much, much better than that.

La Linea, at the Barbican from tonight to 15th April. For more information and to book tickets for La Linea events, go to the Barbican's La Linea website here.