By sizemore Last edited 174 months ago
sizemore Spitfire or swallow 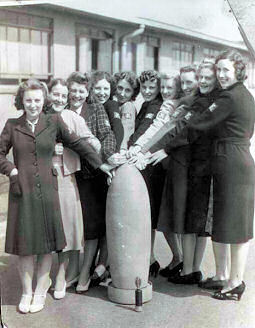 It's amazing how far you could get on the American dollar back in 1942:

'Feckless' WWII schoolgirls with 'lax morals' caused concern in government by skipping school, soliciting GIs - and catching venereal disease, papers show. Letters at the National Archives in Kew show much "trouble" was caused by the girls in the West End of London.

For shame old granny Londonist! Wasn't there enough British spunk around or was it just a case of Johnny Come Lately? We suppose that the new kids on the block would have had less bits missing, what with them only joining in half way through...

A Home Office letter to police noted that many girls "frequented undesirable cafes where they could strike up acquaintances with American soldiers who had plenty of money. "These American soldiers passed the girls on to their friends and in a very short time any one girl could be responsible for infecting a considerable number of people."

Bloody hell - it's like that computer simulation in John Carpenter's The Thing, but with a schoolgirl's furburger doing all the damage. And we thought it was just gravy browning running down their legs in those days...

The Yanks finally got their own back though as the only undesirable cafes in London now are Starbucks. The stuff they have the nerve to call coffee does make you long for the taste of warm gonorrhea at the back of your throat.