No Muslim On The Underground 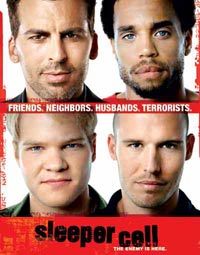 So how's that for a sensationalist headline. Job at Fox news now please?

Of course we don't mean that Muslims have been banned from the tube, rather that the word has been removed from the advertising campaign for new US thriller series: Sleeper Cell. Sleeper Cell tells the 9 part tale of Michael Ealy's Darwyn Al Sayeed, a Muslim FBI agent who poses as a prisoner in order to infiltrate a fundamentalist group run by The Mummy's Oded Fehr. Now we have no idea whether the show's any good or not, since we haven't seen it, but the IMDB user comments seem to approve of some gripping storylines, tight scripts and top notch acting, with Fehr being singled out as a particularly nasty villain.

The campaign, which was meant to start next month, features the tag line: America's latest hero is a Muslim straight out of jail. The campaign has been cleared by the Advertising Standards Authority and now censored by LU for fear of upsetting (presumably Muslim) commuters. Explaining their decision a spokesperson said:

This was clearly intended to be sensationalist and could give offence. Following consultation with Viacom, who manage advertising on the Tube, it was decided to ask for the words 'is a Muslim' to be removed.

Hold on a moment. Does anyone else out there think that maybe they've chosen the wrong words? America's latest hero is straight out of jail. Nothing really new there. But, America's latest hero is a Muslim... Now that's going to turn some heads. If you want to be sensationalist, be sensationalist. And if it upsets a few American tourists, well then that's a few more seats on the train home.

We do, of course, understand that in today's climate, it's best to tread a spaghetti junction like path that upsets no-one. So as soon as the Buddhists get angry, we'll be backing their campaign to remove all advertising from the planet, on the basis that it's all pretty offensive to someone or other, somewhere down the line. In the meatime we'd like to apologise for any offence this post may have caused to any social, political or religious groups and ask that you please don't hurt us, we never meant it really.