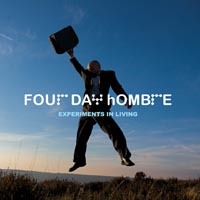 We just have time, before heading up to Islington this evening, to bring you a quick round up of some recommended gigs for the week ahead. If you're yet to make plans for this evening, then we suggest you follow us up to the Bar Academy to catch the wonderful Four Day Hombre. The album turned up in the post the other day and we'll bring you a review of that and tonight's gig sometime next week. In the meantime we'll just say that if you have any love of the musical spaces created by the likes of Elbow and Radiohead then you should probably be there.

Friday Sweden's Jeniferever will be laying some gentle, ambient, guitar-driven sweetness down at the Barfly. It'll warm you against the arctic winds, we promise.

Saturday More mellow folk-acoustic-psychadelic noodlings at the Luminaire this evening with Semaphore, Ed Laurie and My Sad Captain.

Sunday Just in case you think we're geting soft on you, it's back to the Luminaire for a night of sheer beloved fucked up noise. TODD, Part Chimp, Lords and Part Colossus do the honours.

Monday Bob Mould (click on the link for an awesome KEXP live performance) returns to our shores for another evening of solo stuff and classic Husker Du and Sugar tunes. At least we hope so. Bush Hall is the place to be to spot aging grungers.

Monday is also the night for strange and twisted acoustic genius down Brixton way as Lupen Crook plays the Windmill, 22 Blenheim Gardens.

Wednesday Finer minds than ours have been singing the praises of Japanese noisemongers Electric Eel Shock for months now. We'll let Mike make all the bad puns next week after he returns from the Underworld, bruised, battered and no doubt very very happy.